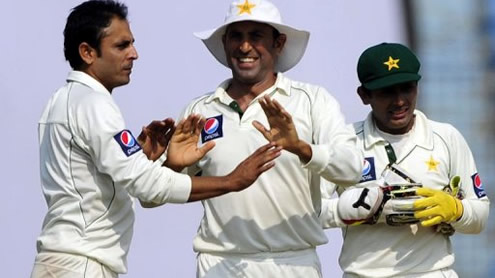 CHITTAGONG – Abdur Rehman grabbed four wickets as Pakistan thrashed Bangladesh by an innings and 184 runs on the penultimate day of the opening Test in Chittagong on Monday.

The left-arm spinner finished with 4-88 as Bangladesh, trailing by 459 runs, were bowled out for 275 in their second innings after lunch to suffer their 62nd defeat in 72 Tests. Rehman, off-spinner Saeed Ajmal and paceman Aizaz Cheema shared five wickets that fell on a fourth-day track offering help to spinners after Bangladesh had resumed at 134-4. Fast bowler Rubel Hossain did not bat due to a shoulder injury, suffered while fielding on Sunday.”Rehman is our main spinner and he has been performing well since he came into the side,” said Pakistan captain Misbah-ul-Haq. “We are not relying only on Rehman or Ajmal since Umar Gul, Cheema and M Hafeez are also bowling well. The team is more confident now and the batsmen are also more experienced.” Debutant M Nazimuddin (78), Shakib Al Hasan (51) and skipper Mushfiqur Rahim (49) were the main run-getters for Bangladesh.

Cheema ended the innings when he had Shahadat Hossain (21) caught by Gul in the covers in his first over with the second new ball. Rehman dismissed well-set Nazimuddin and former captain Shakib in the morning session before accounting for Rahim to finish the match with seven wickets after having taken three in the first innings. Ajmal was the other wicket-taker in the morning when he bowled M Mahmudullah for no score. “It’s difficult to come back when you lose five wickets for 47 in the first innings, but we fought back well in the second,” said Rahim. “Nazimuddin in his first Test showed how to play these bowlers, as did Shakib. We feel sorry for the crowd since they come and support us every time, even though we have not won often.”

Nazimuddin was involved in two stands, adding 78 runs for the fifth wicket with Shakib and 47 for the next with Rahim before being caught by Ajmal at mid-off. Opener Nazimuddin, 41 overnight, hit two sixes and nine fours in his 186-ball knock. Nazimuddin, who was the second-highest scorer in the first innings with 31, defied the Pakistani attack for more than an hour and completed his half-century when he turned Rehman to deep mid-wicket for three runs. He then played a couple of big shots, lofting Rehman over extra cover and then Ajmal over mid-wicket for sixes. He gave two chances off Ajmal after completing his half-century but wicket-keeper Adnan Akmal missed both. Bangladesh had added only 24 runs to their overnight total when Shakib was trapped leg-before by Rehman after hitting eight fours in his ninth Test half-century.

Pakistan had on Sunday posted a mammoth 594-5 declared in their first innings in reply to Bangladesh’s 135, with man-of-the-match Younus Khan (200 not out), Hafeez (143) and Asad Shafiq (104) being the main scorers. “As a senior guy, I want to inspire the youngsters. The key is to enjoy cricket,” said Younus. The second and final Test starts in Dhaka on Saturday.