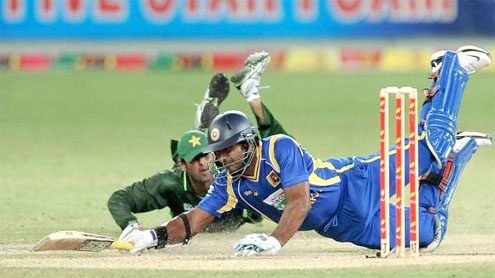 efending a paltry total of 200, Mohsin Khan’s men needed an inspirational bowler to bail them out after a below-par batting display, particularly once Kumar Sangakkara and Mahela Jayawardene had got the Lankans to within range.Afridi ultimately put his hand up – both of them, in fact, in traditional pose – with a five-fer (5-34) to restrict the visitors’ response to 174ao in the 201st ODI to be staged at this historic venue – a feat that earned it mid-match acclaim from Guinness World Records.

The hosts’ captain Misbah-ul-Haq won the toss and elected to bat first, presumably with the intention of clobbering their opponents out of the game and thus the series overall thereafter.However, that potential plan wasn’t quite how things transpired as Pakistan’s top-to-middle order found the going slow on an apparently batting-friendly track. Openers Mohammad Hafeez and Imran Farhat put on 18 for the first wicket, when the latter (10) gloved Dilhara Fernando behind to wicketkeeper Sangakkara, who expertly claimed a one-handed catch.

Hafeez and next-man-in Younis Khan duly added 39 together, but their partnership was broken at 57-2, with the former (27) attempting an adventurous slog sweep off Seekkuge Prasanna and not quite catching it true; Dinesh Chandimal easily pouching the ball at long leg.From there, the home side lost three crucial wickets for 14 runs as a costly collapse hampered their scoring endeavours.Firstly, Khan (18) tamely scooped Fernando to short cover and Jeevan Mendis, who himself was to trap newcomer Shoaib Malik (2) in front next for 69-4.

Mendis wasn’t done there either as he caused more havoc in his next over. He found Umar Akmal’s pads with his second ball and umpire Zameer Haider raised his finger. Sri Lanka’s celebrations were cut short though as a subsequent referral showed the delivery was going down the leg side and Akmal had a fair reprieve.It didn’t matter nevertheless as he was gone merely three balls later; Mendis finding Akmal’s trailing leg and, although Haider turned down the loud appeals around him, another referral confirmed his stonewall demise (2). Another unsuccessful referral – this time, against Afridi – concluded an eventful six balls for Pakistan and Haider.

An alarming mix-up between Afridi and his skipper then saw Misbah (16) embarrassingly run out for the second ODI match in succession to leave Pakistan in serious trouble at 97-6 after 28 overs. Nonetheless, with dangerman Afridi around, Pakistan always held out hope of reaching a vaguely competitive total and he single-handedly led the charge with his characteristic gusto.Despite the cheap loss of Sarfraz Ahmed (10) to Prasanna for a third LBW dismissal in the innings, the explosive all-rounder propelled his country towards 200, passing fifty at over a-run-a-ball with an emphatic six (53no off 52 balls, including two fours and two sixes). His 75 off 65 deliveries got Pakistan up to 181-7, when he edged Thisara Perera behind to the diving Sangakkara, and further contributions from Saeed Ajmal (20), Umar Gul (7) and Aizaz Cheema (3no) saw them up to 200ao.

In reply, Sri Lanka lost opener Upul Tharanga (16) at the same stage Pakistan did Farhat (18-1) as he eagerly chased a wide one from Cheema and deflected it sharply to Khan at first slip.Captain Tillakaratne Dilshan (11) was then perhaps unlucky to depart to a Cheema delivery that swung viciously past his blade, without showing any notable sign of deviation.The referral system showed him no mercy and the outfield was equally as unforgiving on Afridi’s left leg afterwards as he landed awkwardly while trying in vain to prevent a Chandimal boundary near the rope.While he was being examined by medics off the pitch, Sangakkara and Chandimal took Sri Lanka up to 53-2, where the 22-year-old right-hander attempted a dainty dab off Hafeez and played onto his stumps.

Any lingering fears of a Pakistan-style slump from there were slightly allayed by Sangakkara and Jayawardene, whose 102-run stand got the visitors to within 46 prior to ‘Sanga’ (58) letting an Afridi cherry to sneakily scoot through the gate and hit.Ajmal and Sarfraz swiftly joined forces to account for Angelo Mathews (0) without troubling the scorers and Afridi also dislodged Mendis (2) LBW as some late panic set in.Jayawardene (55) drove Afridi to the diving Hafeez, whereas Prasanna (0) coughed up a return catch to Pakistan’s perennial hero in the immediate aftermath amid joyous scenes in the partisan crowd.

Ajmal removed Lasith Malinga (4) LBW as Sri Lanka’s innings went into meltdown and their misery was complete when Perera (4) skied that man Afridi to the lurking Akmal to put the cap on a remarkable Pakistan comeback.Earlier, Pakistan made two changes to the victorious team that had beaten Sri Lanka by 21 runs on Friday, with Shoaib Malik and Aizaz Cheema replacing Abdul Razzaq and Sohail Tanvir respectively.Sri Lanka named the same XI from that close defeat in another bid to tie this best-of-five series and ensure there was all to play for at Wednesday’s final encounter in Abu Dhabi.

Aizaz Cheema not out 3

U. Tharanga c Younis b Cheema 16

A. Mathews c Ahmed b Ajmal 0

S. Prasanna c and b Afridi 0

D. Fernando not out 0

Baloch blood on our hands