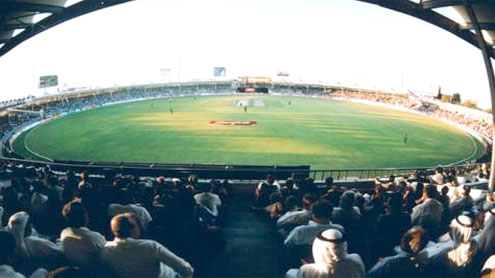 ISLAMABAD: The Sharjah Cricket Stadium that will be hosting Pakistan-Sri Lanka test match on November 3, has created history by entering the Guinness World Records after an achievement of playing host to 200 one-day international matches, the most at one venue.

The stadium will also be hosting Pakistan and Sri Lanka’s One Day International on November 20. Sharjah has played host to many memorable matches in past. Sachin Tendulkar’s back-to-back hundreds against Australia in 1998 and Javed Miandad’s last ball six against India in 1986 will be two of the most memorable moments for Indian fans at Sharjah. Other memorable moments at this venue include Wasim Akram’s streak of hat-tricks, Mutthiah Muralitharan’s wicket haul.

“It truly is a great honour to be a part of the Guinness World Record files. It means a lot to us and we will keep doing our best to continue to add to the number over the time,” cricketcountry.com quoted the creator of the stadium, Abdulrahman Bukhatir as saying.“The Guinness recognition is recognition for all those who contributed immensely to successfully staging matches. It’s an honour for the UAE and especially for fans, who are our biggest supporters.”“We look forward to their enthusiastic response as cricket returns to the Sharjah Cricket Stadium and with it the glory days,” Bukhatir added. – APP

Hillary in Pakistan with a Heavy Agenda

Hillary in Pakistan with a Heavy Agenda