by ToP
in Cricket
1 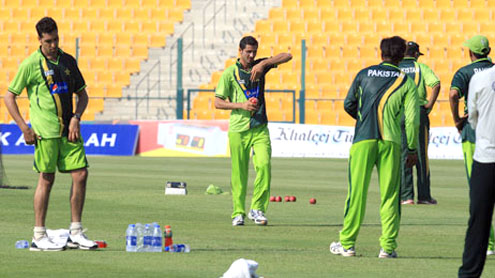 The UAE is gearing up for its biggest cricket season this year. Sri Lanka is set to face Pakistan in three Tests, five one-day internationals and a Twenty20 match.

Sri Lanka comfortably beat Pakistan 2-0 when the two countries met last in 2009. Pakistan take on Sri Lanka in first Test from Tuesday at the Zayed Cricket Stadium in Abu Dhabi.Pakistan is looking ahead to play some Test cricket and Sri Lanka will be desperate to regain the winning habit.A keen contest is on the cards and Abu Dhabi, Dubai and Sharjah will witness top class cricket in the coming weeks.  Overall Pakistan and Sri Lanka have played 15 Test series since 1981 — Pakistan have won seven, Sri Lanka emerged as winners in four and four were drawn.

Both teams have landed in the UAE with the squads full of new players. The Pakistan-Sri Lanka series will be followed by Pakistan-England matches in the UAE.While addressing the media at the Zayed Cricket Stadium, Pakistan captain Misbahul Haq said: “I hope the team will carry on the good work. We have been performing consistently for quite sometime. There are not much chops and changes in the side.“Every player knows his role well. Everybody is performing and that is the key. It is going to help us and in fact it is helping us for almost a year.”

When asked about the change in Pakistan Cricket Board, Misbah said: “The team is not concerned about the changes in the top management. We are focused on the game and we will try to give our 100 per cent on the field. We are professionals and it is our duty to perform in all conditions.” Sri Lanka have not been doing well recently.

They lost an away series in England and they were on the receiving end against Australia at home. But Misbah did not agree with the scribes that Sri Lanka are struggling.He said: “Sri Lanka are one of the best sides in the world. We have to really play well to match them. They have played in England where conditions were not conducive for them.

“They were without Muttaih Muralitharan and it was a big loss to them. Magical Murali used to take 10 wickets in every match. But still they have bowlers like Suraj Randhiv and Rangana Herath who can disturb any batting line-up in the world.  Though we have got very little Test cricket under our belts, we will try to do well against them.

Misbah, who has been doing well in all forms of cricket, added: “It is unfortunate that Pakistan is devoid of international cricket but we feel UAE a home away from home. Pakistan have played a lot of cricket in the UAE — especially in Sharjah.  We have fond memories attached to Sharjah. We are very comfortable playing here.”

While answering a question about his team’s average age, Pakistan manager Colonel Naushad said: “We have got nine players who have crossed 30 barrier but at the same time there are some emerging players. Azhar Ali, Asad Shafique, Junaid Khan have already proved that they can perform on big stage. Aiza Cheema, a late entrant in international cricket, was impressive on Zimbabwe tour.

“The team is a good mixture of experience and youth. We are hoping to see competitive cricket in the coming days.”Misbah praised Waqar Younis for his contribution to Pakistan cricket as a coach. The captain said: “He did a wonderful job with the team. His replacement Mohsin Khan knows his role well. He is even more passionate about Pakistan cricket. The main thing is the team and we will try to carry on the good work of Waqar. – Kahleejnews