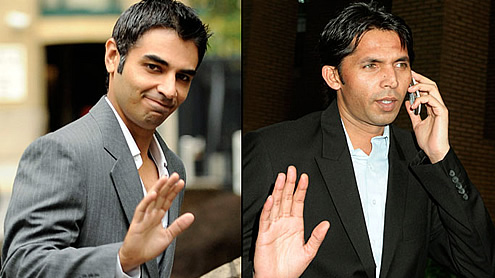 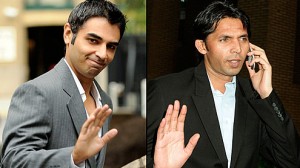 A further three Pakistan cricketers have been named in court as being allegedly involved in a betting scam. The prosecution claim that the agent Mazher Majeed, 36, told an undercover reporter he had players he could control in relation to fixing. Former captain Salman Butt, 26, and fast bowler Mohammad Asif, 28, deny conspiracy to accept corrupt payments and conspiracy to cheat. The players were named as Kamran Akmal, Umar Akmal, and Wahab Riaz.  Fast bowler Mohammad Amir, 19, was earlier named as also being under the agent’s control. The case at Southwark Crown Court centres around a Test match against England at Lord’s in 2010. However, evidence is being heard relating to an Oval Test which took place on an earlier date.

The court heard that Mr Butt was allegedly taped by an undercover reporter for the now defunct News of the World agreeing to deliberately bat a “maiden over” – which is when the batting side scores no runs in an over. His London-based sports agent, Mr Majeed, was alleged to have discussed the arrangement with the cricketer by phone while agreeing a deal with reporter Mazher Mahmood who was posing as a rich Indian businessman. The court heard that Mr Mahmood had paid £10,000 to fix part of the match. In return for the £10,000, Mr Mahmood wanted to see proof that the agent had players under his control, and that he could control part of the match, the jury was told. The agent then phoned the cricketer to confirm the deal, the prosecution claimed. The captain agreed to tap the ground with his bat after the second ball of his deliberate maiden over, an action which would not arouse suspicion because batsmen frequently do this.

When Mr Mahmood pointed out that the cricketer sounded asleep during the phone call, Mr Majeed is said to have said: “Believe me, he’s done this many times.” The journalist asked whether Mr Butt could be trusted, to which the agent allegedly replied: “Salman is one million per cent trustworthy.” Their alleged conversation, which was recorded by the reporter, happened the night before the Test last year. In the event Mr Butt did not play the maiden over as planned as he ended up batting earlier than expected, the court heard. The prosecution said he also could not help scoring runs as a new ball was being used, which travels much more quickly. Prosecutor Aftab Jafferjee QC said: “To bat a maiden over requires very considerable control, which he is talented enough to manage, but not when he faces a hard, solid new ball at the beginning of the innings.” Afterwards, the reporter asked Mr Majeed “what went wrong”. The prosecution says that as Mr Mahmood pressed for results, the agent became indignant that his credentials were being questioned and claimed that his Indian “customers” would pay £400,000 without the proof the reporter was after. The Test, which ended on 21 August 2010, saw Pakistan beat England by four wickets at the Oval in south London.

The court then heard details about a meeting between the reporter and the agent on 25 August, the day before the final Test match of the series between England and Pakistan at Lord’s. The jury was shown a covertly-filmed video of Mr Mahmood handing £140,000 in £50 notes to the agent, who counted out the money on a table in front of him. The agent said in the film: “I’m telling you, if you play this right, you’re going to make a lot of money.” The prosecution said Mr Majeed promised the reporter that Mr Amir and Mr Asif would deliver three no-balls at specific points in the Lord’s Test. Mr Majeed allegedly said the no-balls would be “well over the mark” to ensure that they were noted by the match officials. Mr Jafferjee said: “No umpire could possibly miss it. Asif, with his tact and greater experience would bowl a no-ball which could not fail to be called, but only inches over the popping-crease.” Footage of the Test was shown in court which, according to Mr Jafferjee, showed Mr Amir’s first deliberately invalid delivery was “an enormous no-ball”. The jury was also read earlier texts sent between Mr Majeed and Mr Butt in May last year in which they allegedly discussed fixing games at the Twenty20 World Cup in the West Indies. – bbc