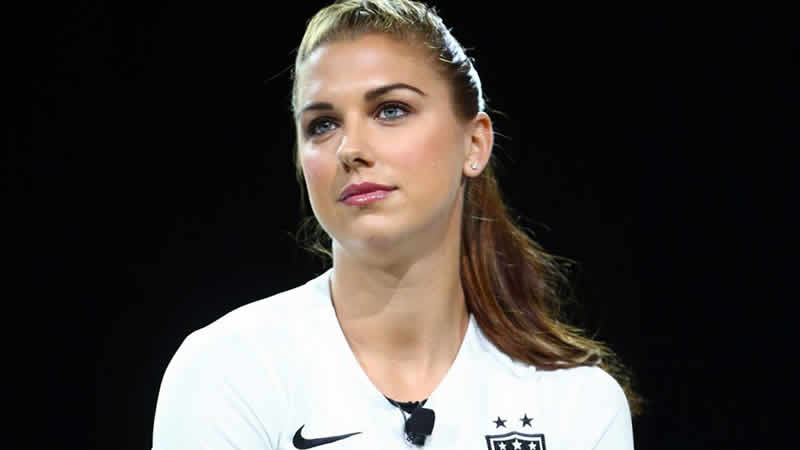 Who said soccer is a Masculine sport? Females play soccer too. It is widely known by millions of soccer fans all over the world for the MEN who kick those balls around the field, across nations and by competing with the world too, we could expect this since the game takes an immense amount of physical strength and emotional stability.

to endure the pain of loss of an entire team as well as the physical strength, tackle, stamina and quick thinking mindset on the field which is a standard of all professional soccer players. Well newsflash, a team of women would like to kick balls too and in their case, we can understand. It’s not often women would be recognized as professional sport players in Soccer for god sake! So ladies, allow me to take the honor of bringing forth 10 of the Top and hottest female names, the best female soccer players right now!

My heart goes out to this inspirational women Abby who is more of your mature, strong, individuality driven women out there and practices the same amount of integrity and principals to other female players even out on the field. She is more of a mentor to young and upcoming female players in the world who wish to pursue a 15 year career like she has, sadly retired as a soccer player but will always remain in the books as one of international Soccer’s All-time greats in the women category. She has scored 184 Goals, internationally which is recorded to be more than any other player, female and male and where 77 of those 184 were shot with her head into the goal post! Her greatest goal ever to be recorded sparked at the point of nail-biting and anxiety against Brazil in the 2011 World Cup in Germany and that too with her head! Ouch to that soft head and I would be lucky to give it a massage. The team would have definitely lost the captain of their ship with her retirement.

2015 FIFA Player of the year. Carli Lloyd has scored 87 international Goals, has 222 Career caps and is a 2015 World Cup champion and surely did bring it home for all the successful women and professional female soccer players out there. The success at which she has achieved is sincerely up to the greatest of her own specific level and can be regarded as somebody exceptionally compelling and an emerging female master whom has a lot to teach other aspiring female soccer players who wish to make it big leagues and to play on world cup scale In the future. Carli is what defines what feminine soccer is all truly about and breeds new life into the game throughout her soccer journey. She keeps it fresh and evergreen which is why she earned herself a place at top spot on this list. We greatly admire and adore her so as the rest of her world fans.

She’s so pretty! Alex Morgan may look like an emotional women, but sincerely is much more stronger than most and puts in respectable team efforts and co-ordination towards reaching one goal with other in her team are just beautiful the way she used sensuality and feminine softness to mark the trail of success through making a way path so that everybody can benefit and shine under the spot light in the end. Hottest of female soccer players? She is definitely one of them in all sense of the title of accolade, not just her body but her warm, loving and offering personality too which is absolutely attractive above all. The combination of her physical beauty and personality sure does exhibit her total attractiveness altogether. Not any women can be extremely hot in appearance and bag a great personality too. She is a ‘Complete’ Women. This is something that other women may want in terms of how she is able to be whole in her personality while having all the grappling looks at the same time. She, as women is able to match everything in her life without even trying while other women may find themselves constantly crying in trying to tap into self-actualization or in order to get things right.

You go Marta Da Silva! Brazilian babe she is and definitely has a lot more to offer as a female soccer player all round with regards to body, and professional skill as well. Her talent as a female soccer player has been discovered by a renowned Men’s Football Club in Rio de Janeiro and has absolutely thrilled them with her playing results. Boys you’ve got some heat competition here! Her soccer skills have been absolutely amazing, tried and tested to be one of the most skilled in her category and other women respect her as being one of, if not the best in female players in her own special way. I wish to start an honorable round of applause and team of our own people to honor her name due to the amount of setbacks she had before actually making it as an officially recognized female soccer player.

Yes she rides solo baby! One of the best female soccer players has definitely got to be Hope. She is strong built, masculine women may not all be that sexy but they certainly do give of that sexy intimidation to some guys by having a large built body, they sought of appear to be a large women that you would want to cuddle against. Protection and warmth in reverse I would say. Now here is where she ultimately rules the hottest part of being a female soccer player. She possesses that Jay Lo type of body and thickness. This is purely where she trumps it for her beauty against the rest! Read More: Four Women killed In Quetta Bus Attack

As far as the 10 hottest but best female soccer players would go, Dzsenifer Marozsan’s name sounds rather unique and commands a lot of respect as the rest of the best female soccer players names would. She has an eccentric spirit that is truly different from all the other professional female soccer players mentioned above. She is spicy hot in appearance and her physical beauty. That physique of hers, one can notice has been fine tuned for performance which her body and skill on the field is an outcome off. The energy she can emit is enough to give competition to the male stallion soccer players and would definitely be a fire to fire battle and really what is hotter than fire?? Overall Marozsan is a field warrior and will stop at nothing from achieving what she wants to do as a successful female soccer player.

Oh Sydney…Your tenacity is so truly very sexy to delve in. Yes she is a tenacious sexy female soccer player and sort of makes fans want to run around the field behind her, chasing after her, she’s just that so tempting by her physicality on the field and just her appearance in general. She is a remarkably hot women in all aspects, seeing that she has had the strength to juggle a personal life as well as a professional demanding soccer career as a female soccer player and this is something requires more than just the usual female. She has been strong throughout all of her setbacks and nothing is going to put her down. Being compared isn’t something she fancies as every other confident women wouldn’t and so I am to leave her in her perfect form as is.

Here we see a female of integrity and utmost respect and passion for her line of expertise on the ‘field’ of soccer in general and she’s Japanese! This alone should depict to you without even being stated, the kind of discipline in her mindset, focus upon the ‘goals’ and outcomes of her skills as a professional female soccer player. Homare Sawa is also the Former FIFA Women’s World Player of 2011, which is quite an envious achievement that is bound to spark and rift a considerable amount of jealousy from other striving female players in the world. Overall the hotness in her Asian comes purely from that Manga Doll type of appearance which is yet to bring about sexual arousal of all sorts to male fans of Sawa.

Lotta is a Swedish soccer hottie and active player right now!! Them Swedish girls and their sweet accents are mesmerizing isn’t so? I couldn’t agree more and I’m sure that you will too. Schelin Is one of the hottest and best female soccer players for several reasons and most of it lie in the physical aspects of her. With women it’s very hard to distinguish precisely what makes them hot, as they all have more or less the same things, yet Lotta on the other hand has a unique feminine body and a joyous spirit which spirals her fans with cheer and laughter and sincerely gets their attention to some escalating levels. With her, she’s in it for the right reasons and want to bring about real change with women like minded to her visions.

It all began at 17 years old when she has enjoyed a long career in the German National Team. Nadine Angerer can be considered as one of the best goal keepers in her categories as her victory came about from her eccentric and rather honorable efforts, leading Germany to the victorious point of their end game by working extremely hard and sharp by not allowing anybody to score by outscoring the Opposition team 21-0. Amazing achievements shown by her thus far and it’s sincerely remarkable too. This has gotten her to be first choice goalie ever since and still first choice today. She has also been awarded with the Year Award of being the most outstanding female player of 2001, for that entire calendar year.