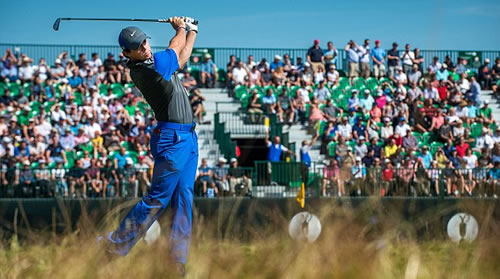 Nothing more could be asked from an opening day at The Open Championship than the two biggest names setting out their stall alongside the world number one before a raucous audience of lucky sunbathers at Royal Liverpool. Rory McIlroy’s sumptuous 66 to set the pace was nothing less than expected, of course, since he’s become Thursday’s child. This was the fifth time in 14 starts this season he has led following the opening day.

Neither would anyone be too surprised that Adam Scott made light of the fact he was playing in the more difficult afternoon conditions to demonstrate why he began the event as favourite. Given the wind’s added strength his 68 was perhaps the equal of the leader’s score in terms of merit.

But it was the sight of Tiger Woods holing putts and tip-toeing menacingly into the top ten that was the real bonus and gave the day its delicious flavour. Certainly, those pundits who wrote him off in the build-up must be shifting uneasily in their seats. Kidding himself if he thinks he can win? There was enough compelling evidence here to emphasise the point that the most futile punditry of all is calling into question the prospects of the fourteen-time major champion. This was his first round in a major for 11 months owing to back surgery in March but the sight of him skipping onto the media podium following his three under par 69, before marching merrily to the practice ground, illustrated that the 38 year old is healthy again and back in business.

What a leaderboard we have already. Fireworks were promised and duly delivered at this wonderful venue. How on earth did the Open go 39 years from 1967-2006 without being played here? Evocative stories pulled at the full range of emotions. When was the last time two brothers were tied third after the first day of an Open, for example? The Molinaris Frankie and Eddie shared bragging rights with their 68s but still lost out by a stroke for top Italian to Matteo Manassero, now thankfully emerging from his half-season funk.

Also on 68 is gentleman Jim Furyk, determined to atone for his last day failings at Medinah at the Ryder Cup this year and who must have impressed his playing partner, none other than captain Tom Watson. Remember Sergio Garcia, dressed all in yellow on the final day here in 2006, to the vast amusement of the man who beat him on that occasion? Woods duly texted a friend: ‘I’ve just killed tweety-pie.’

Dressed all in black, one of the nearly men of major championship golf is also on the popular four under par mark. Then there was the other end of the scale and the Aussie Brydon Macpherson, who qualified by finishing fourth in his national Open last December but is now suffering so badly from the yips the poor soul failed to break 90.

The game takes lumps out of everyone at some point. Two years ago on the Lancashire coast Ernie Els was crowned champion. Here he began with a triple bogey seven, including three putts from no more than 12 inches, his concentration shattered after his tee shot struck an unlucky spectator flush in the face. Woods began slowly too, with bogeys on the first two holes. By his side, Henrik Stenson’s imperious ball-striking early on offered a sharp contrast.

Things started to change at the fourth. Woods had struck a tentative putt at the second from 6ft to miss but here from the same distance there was something of the old authority to instil some confidence. A lovely up and down for his first birdie at the 5th was followed by a series of pars before the next key moment at the 11th, where he holed from off the green.

Talk about a light switch going on. At the next two holes Woods struck gorgeous approach shots that led to two more birdies, followed by further gains at the 15th and 16th. Five birdies in six holes, then. Someone asked: did it feel like old times? ‘It’s not that long ago,’ said Woods, smiling. ‘I did win five times last year.’

There have been winners who have received a less rapturous reception than the one afforded Woods at the 18th. Part of it is to do with what happened in 2006, of course, when Woods found an inner peace here, to use his own words, following the death of his father Earl that April. Clearly, the locals are rather taken by the thought they might be able to help out again, as he looks to end a drought in the majors stretching back six years.

The wind had freshened by the time Scott and Justin Rose stepped on to the first tee. Both oozing with confidence, it showed over the front nine with Scott, in particular, striking a series of quite majestic blows. When he reached the turn in 31 shots, with three par fives to come, it looked as if the Australian would threaten McIlroy’s lead.

The back nine proved a beast for the late starters, however, and he pick up no more strokes to par. Rose bogeyed the 12th and 14th  and had to settle for a 72. Just behind, sentimental favourite Lee Westwood showed he retains plenty of fight as he battled manfully to a 71.

Leading Englishman? Twenty-four year old amateur Ashley Chesters, from the same small Shropshire village of Wem that produced Sandy Lyle. He shot 70. It was a day to score then, with the wind expected to blow significantly on Friday morning. We’ve seen the best players plunder. Now, can they protect? – dailymail