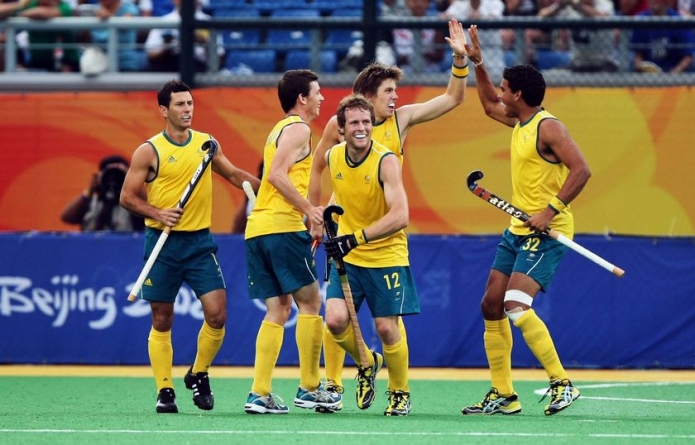 Drag flick specialist Chris Ciriello scored a hattrick as defending champion Australia beat the Netherlands 6-1 to take their second consecutive men’s field hockey World Cup. The Dutch got off to a good start as Jeroen Hertzberger opened the scoring in the 14th minute, dribbling past a defender to drive the ball in from near the top of the circle.

But that was the high water mark for the Netherlands, as Ciriello equalized on the first of his three successful penalty corners six minutes later, wrong-footing Dutch goalkeeper Jaap Stockmann. Australia then began a long stretch of dominance, keeping possession and pinning the Netherlands on their half of the field. Kieran Govers, Glenn Turner and Jamie Dwyer also scored for the winners. Stockmann, who was voted ‘keeper of the tournament, was beaten more decisively on each penalty.

“The boys played really well, I was just lucky enough to be on the end of it, finishing it,” said Ciriello.“We had a good push and trap today, and our strikers worked really hard, so it’s not just a hattrick for me, it’s for the rest of the team and for Australia,” Ciriello said. Earlier Sunday, Argentina beat England 2-0 to take the bronze. In the opening phase the Dutch resisted the onslaught that put every other side Australia had faced during the tournament at a disadvantage within minutes. The crowd of 15,000 overwhelmingly Orange fans, including the Dutch king, queen and three princesses, began to hope that the men could duplicate the success of the Dutch women. They beat Australia 2-0 in the women’s final Saturday. But the moment was fleeting. “From then on it was all about the Aussies,” conceded Netherlands captain Robert van der Horst.

“They went all in on their attack for about sixty minutes I think.“ After Ciriello’s goal, Australia began penetrating the Dutch circle again and again. Stockmann saved one penalty corner, and blocked several shots, but it was a matter of time before the goals began to fall. Van der Horst said Australia was the “deserved winner of this tournament.“ “We kept on fighting at the end but all credit to Australia,” he said. Australia’s Dwyer, who is retiring, said he leaves an Australian side in peak form. “We played really well throughout the tournament, the best hockey that I think we’ve ever played,” he said. -dawn