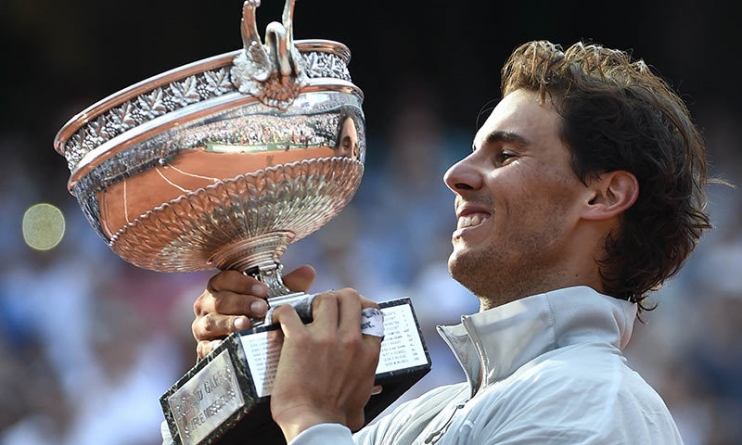 Rafael Nadal clinched his ninth French Open and 14th career Grand Slam title on Sunday with a brutal 3-6, 7-5, 6-2, 6-4 victory over a battling Novak Djokovic. The world number one also became the first man to win five Roland Garros crowns in succession as the 28-year-old took his record at the tournament to 66 wins against just one defeat.

His tally of 14 majors equals the mark of Pete Sampras and puts him just three behind the all-time record of Roger Federer who is almost five years older. Defeat was cruel for world number two Djokovic, the 2012 runner-up, who still needs a French Open title to become just the eighth man to complete the career Grand Slam. “Every moment was crucial, all the points were so hard,” said Nadal. “Playing against Novak is always a big challenge, I have lost to him the last four times. Every chance I have to beat him it’s because I have had to play to my limit. I feel sorry for Novak.

He deserves to win this tournament one day and I am sure he will.“ He added: “It’s an amazing, emotional moment for me. I lost the Australian Open final this year when I had a problem with my back. Today tennis has given me back what happened in Australia.“ The Serb dominated the early stages of Sunday’s final, the pair’s 42nd meeting, seemingly immune to the sweltering 30-degree heat on Philippe Chatrier court. But Nadal, playing in his 20th Grand Slam final to Djokovic’s 13th, grew stronger as the final wore on as he ended a four-match losing streak against his old rival.

The 3hr 31min duel ended on a sour note when Djokovic double-faulted on match point, shaken by a shout from the crowd. In a tense opening to their seventh Grand Slam final meeting, the steadier Djokovic, sporting a white cap against the fierce sun, pounced to break for 5-3, after Nadal put too much zip on a forehand. The Spaniard had two points to break back in the ninth game but two more ballooned forehands kept Djokovic, who had even served and volleyed at 0-30, in the picture. -dawn