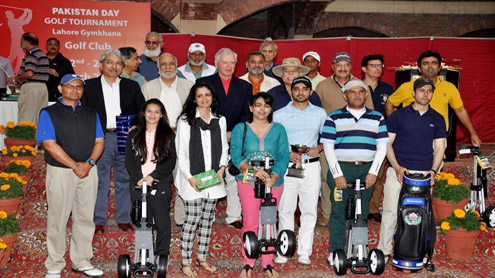 The Coca Cola Classic Golf Tournament  concluded at the Lahore Gymkhana Golf Course after two days of frightfully contesting golf. In the Seniors section the dominant one was Javed A.Khan who displayed the flair of a young one and emerged as the winner in gross category with a masterly score of gross 74,two over par. Through consistent and steady shot making ,he managed to hold sway over classy players like Qayum Rashid and Naeem Chaudry.In the seniors net event,the successful one was Hamid Zaman and his score of net 63 reflects total control over his swing and excellent application of golfing skills.

Akhter Hayat claimed second net. As for the competition in the main amateur category,the top performers were Waleed (winner gross) and Sardar Murad (runner up gross). Danish Javed won the first net and Aftab Arshad claimed the runners up position. yesterday. Others who did well in subsidiary contests are Moiz Khan and Hamza Mansoor in gross section of handicap category 10 to 18 and the net winner was Jamal Hussain ,a young and upcoming golfer. His score was net 69.

Amongst the ladies ,visible was the improvement in the abilities of the young ones Maryama Khan and Noorie Zaman Khan.Both Maryama and Noorie are passionate about winning honors at national level and the way they are devoting themselves to the game ,it appears 2014 will be a year of success for them.In this championship Maryama won the gross title with a score of gross 82 and Noorie won the net top position with a score of net 70.

At the conclusion of the Coca Cola Classic Tournament,the General Manager,Coca Cola,John Seward awarded prizes to the winners. –Times of Pakistan