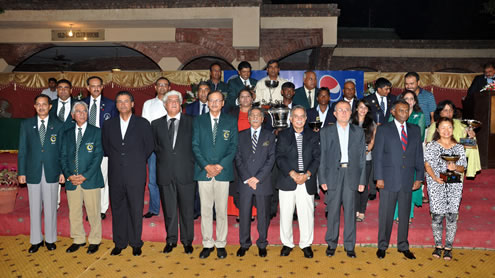 The event was sponsored by Pepsi Cola. Sagar was consistent all through the final round. And though he was behind the overnight leader Taimur Khan at the start of the final day, he lunged ahead early in the day and from thereon he maintained his lead without getting challenged by any of his rivals.

Sardar Murad, Taimur and Naeem Khan could not press their way to victory and had to be content with positions other than the first. However the experience of this sharp edged competition has brought forth names like Taimur and Naeem and Murad who are going to be in national reckoning from now on. A name that deserves credit is that of Ali Hai of Karachi. After his poor showing in the first round, he recovered with considerable authority and with superb showing on the second, third and fourth days, he secured the runners-up position. And along the way on the final day, he capped his effort with a hole in one on the par-3, 17th hole. Ali once again demonstrated his mental strength. In the women’s section, Ghazala Yasmin of Garrison Golf Club managed to retain her title. Her hard work paid off. Her score of gross 240 for three rounds was 14 strokes better than her nearest rival Ami Qin. Tehmina Ahmed of Lahore Gymkhana came third with a score of gross 261. As for other results, Murad won the first net prize, followed by Waleed Zubair who came second. – dailytimes