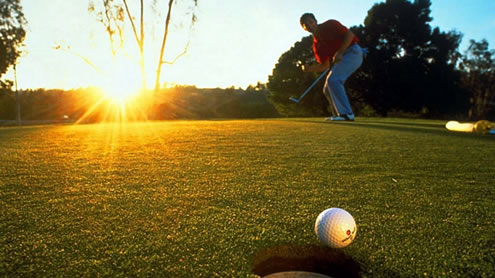 LAHORE: Naeem Khan from Peshawar caused a surprise by securing the top position on the leaderboard at the end of the first round of the four rounds 52nd National Amateur Golf Championship that started at the Lahore Gymkhana Club Golf Course here on Thursday.

In the presence of many established champions from Pakistan and also from Bangladesh and Sri Lanka, Naeem made a startling beginning, and at the end of the first day everyone wanted to know who this young one was. Naeem managed to make his mark with a score of excellence, a round of two under par, compiled with the help of birdies on holes 6, 7 and 9 on the front nine and birdies on holes 11 and 16 on the back nine. Added to that he managed ten regulation pars and to slightly erode his excellence were the bogies on holes 10, 12 and 18.

Score wise Naeem appeared as the best at the end of the first round yet competition wise he had to contend with rivals like Omer Salamat (Royal Palm), Mohsen Zafar (Royal Palm), Sardar Murad (Gymkhana Club) and Mohammad Sagar (Bangladesh).

Omer displayed brilliance and so did Mohsen and Murad. While Omer was placed one stroke behind the leader at a score of gross 71, Mohsen was at 72, Murad at 73 while Sagar was at 74.

This author has not added a biography. Meanwhile Top has contributed 2458 posts. Click here to view them.