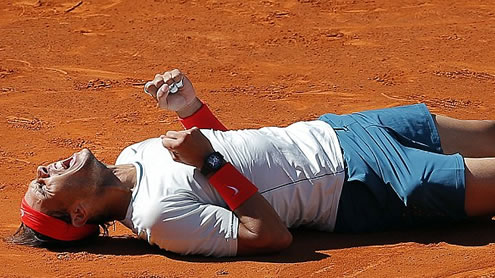 Rafael Nadal continued his superb form since returning to tennis earlier this year by defeating Stanislas Wawrinka in the Mutua Madrid Open final to lift his fifth title of 2013.

Playing in his seventh final in as many tournaments after making his comeback from a lengthy injury lay-off in February, Nadal was simply too good for Wawrinka as he claimed a 6-2 6-4 victory in 71 minutes. The triumph was Nadal’s third at the Madrid Open and 55th overall of his career, and one that will give the clay-court king further confidence heading into the French Open, where he will be hoping to claim an eighth victory in nine years. Nadal came into today’s match with Wawrinka having won all eight of his previous career meetings with the Swiss and, like the women’s final in Madrid earlier today, the opening set was largely one-way traffic in favour of the eventual victor before things became a little closer in the second. Fifth seed Nadal raced into a 4-0 and 5-1 lead at the outset, winning two of his seven break points while not allowing Wawrinka any chance to hit back, before the Spaniard served out at 5-2, winning the set with an ace in just 31 minutes.

Wawrinka, the 15th seed, tried to battle back in the second but again he could not create any break points on the Nadal serve and it was only a matter of time before the home favourite finished things off, which he did after breaking in the seventh game. Nadal hailed the win as a ‘really special’ success in front of his countrymen in Madrid. He also felt he had produced his best performance in this year’s tournament in today’s win, which earned him a 40th clay-court crown.

‘I’m very happy for everything that has happened. Forty titles on clay are far more than I ever dreamed of.’ Defeated Wawrinka conceded he could not live with Nadal today, saying: ‘I think he started really well. Even if I’m playing my best tennis and [am] completely fresh, it’s really, really tough to beat him. ‘It was tough for me. The ball was flying. I didn’t find out a way how to play my game, how to be aggressive on the court. He was also dictating the points.’ – Dailytimes