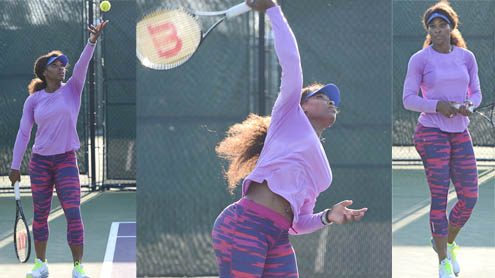 She is obviously not one to hold back on the practice courts.And while her work ethic has led Serena Williams to an astonishing 15 grand slams titles, it also left her with prominent underarm sweat patches in Florida on Saturday.

The 31-year-old looked in fine form as she was put through her paces by father Richard at the Sony Open in Key Biscayne.The cheeky 31-year-old revelled in showing off her famous booty in a pair of skintight pink and purple leggings.And the fashion loving sports favourite had clearly coordinated her outfit, as she wore a matching top and sun visor cap.However, she may feel disappointed in retrospect that she made a style fault by donning garish white and yellow trainers that spoiled the look.

It seems Serena’s beau and coach Patrick Mouratoglou had decided to take the afternoon off, leaving old hand Richard, 71, to lead her session. The 42-year-old started coaching Serena in June last year, just after she suffered her first ever opening round defeat in the main draw of a Grand Slam tournament at the French Open.Since they teamed up she won to her fifth Wimbledon title, the Olympic Gold Medal, her fourth US Open title, the annual year-end championships and shot back up to number two in the world rankings.

It looked like she was going to continue her winning streak at the Australian Open in January, until she suffered back spasm in her quarter final match against Sloane Stevens, which she ended up losing 3-6 7-5 6-4.However, she has been making easy progress at Key Biscayne, swatting aside Japanese player Ayumi Morita in the third round after her practice session, and is due to face off against Slovakian Dominika Cibulková on Monday. – DailyMail