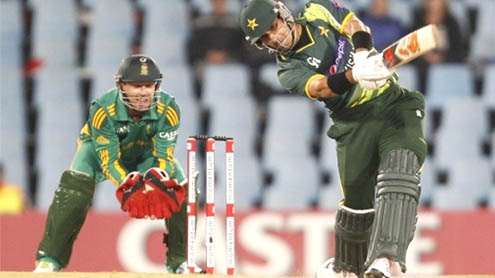 CENTURION: Pakistan defeated South Africa by six wickets in the second one-day International at SuperSport Park on Friday to level the five-game series 1-1.

The home side won the first game by 125 runs in Bloemfontein last Sunday. The third game is in Johannesburg on Sunday.Pakistan Captain Misbahul Haq scored unbeaten 57 off 75 balls to lead from the front.Earlier Pakistan fast bowler Mohammad Irfan took four wickets in a devastating opening spell as South Africa were bowled out for 191 in the second one-day international at Super Sport Park on Friday.South Africa crashed to 62 for five but recovered to reach 177 for seven when a thunderstorm stopped play after 34.3 overs. Tall left-armer Irfan took a career-best four for 33 in seven overs.

Farhaan Behardien led the South African fightback, making a measured 58 off 82 balls in his maiden international half-century.Robin Peterson made 39 not out and helped Behardien put on 67 for the seventh wicket before Behardien was caught on the midwicket boundary one ball before the stoppage.Robin Petersen was 39 not out and Kyle Abbott was unbeaten on four when rain interrupted play.Earlier in the day, South Africa elected to bat after winning the toss ahead of the second one day international, ESPNCricinfo.com reported.

Both sides made one change to their respective line ups.South Africa brought back Dale Steyn, replacing Rory Kleinveldt who had a great run with the ball in the first match and in the test matches.Pakistan, which are looking to change things around brought Mohammad Irfan into the team. Asad Shafiq has been axed in favour of a stronger bowling line up. “We wanted to strengthen our fast-bowling department,” says captain Misbahul Haq.