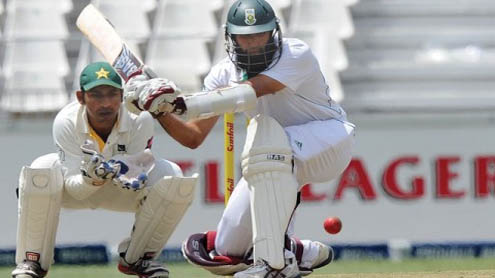 JOHANNESBURG: South Africa’s cricketers are increasingly comfortable as they look down on the rest of the cricketing world from their number one spot in the Test rankings.

A 211-run win in the first Test against Pakistan at the Wanderers Stadium was their fourth win in a row – all achieved within four days – and it extended their unbeaten run to 13 matches, going back more than a year. Not only are South Africa on top of the Test team rankings, they dominate the individual categories too.Hashim Amla tops the batting list, with AB de Villiers and Jacques Kallis also in the top ten, while Dale Steyn and Vernon Philander are the two top-ranked bowlers, with Morne Morkel at number nine.

In addition, Kallis is the leading all-rounder. “It’s been a great year for our squad, and to be honest I still don’t think that I am the best batsman in our team,” said Amla. “What has been most pleasing for us has been the all-round contribution from everyone in the squad.” “Everybody wants to do well for this team,” said Steyn, who destroyed Pakistan by taking six for eight in the first innings and had match figures of 11 for 60. “We’re really pushing on for something at the moment. We’ve managed to bowl teams out for under 50 and with the bat we have managed to have some big sessions where we have piled on the runs.

Despite being in his 17th season of international cricket, Kallis says that at the age of 37 he is enjoying the game more than ever. “You wake up in the morning, keen to practice and play, not only because the team is winning but because of the environment that has been created and the players we’ve got.” Much of the credit for the team culture is due to captain Graeme Smith, the first man to have 100 Test captaincies under his belt, and coach Gary Kirsten, whose understated methods, based on humility and giving players responsibility, are proving as successful with his native country as they were when he was in charge of India. “We don’t spend too much time stressing. We feel that we are good enough to handle what comes our way and that over the five days we can be resilient enough and have the skill to match up,” said Kallis.

That resilience was severely tested when South Africa seemed on the brink of defeat in the second Test against Australia in Adelaide in November. They batted out the last day thanks largely to a patient unbeaten century on debut by Faf du Plessis, then went on to clinch the series with a convincing win in the final Test in Perth. With a 10-day gap before the second Test starts in Cape Town on February 14, the players will be expected to take responsibility for ensuring they stay tuned before the team reassembles there on Monday. The Pakistanis, meanwhile, have arranged an unofficial two-day practice match against a Western Province Invitation team in Cape Town on Sunday and Monday. Their chief challenge, according to captain Misbah-ul-Haq, is to counter the threat of the South African fast bowlers when they operate with the new ball. – DailyTimes