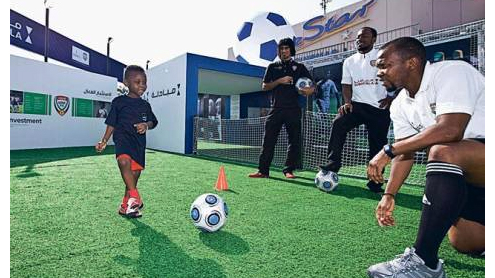 DUBAI: The UAE football team could look forward to great support from fans when they take on former Asian champions Iraq in the 21st Gulf Cup final at Bahrain’s National Stadium in Riffa on Friday night.

Emirates airline on Thursday announced that it would fly two free Boeing 777-300ER flights for football supporters.Many diehard UAE soccer fans have already reached Manama and some of them are set to travel on Friday morning to support their team.The fans are also quite excited about the prospects of their team in the final. “I have full confidence in our team. We will win the Cup,” Abu Dhabi-based Emirati Jasim Mohammed Al Harmoudi told Media.

“We have some great players like Abdulrahman Khamis, Ahmed Khalil and Ali Mabkhout,” said Al Harmoudi, who is on the way to Bahrain by car along with some of his family members.UAE head coach Mahdi Ali also thanked fans for their support. “I am very proud of our fans. I thank them for coming out to support us in the semi-finals. The fans make the game; without them there is no good match. Their presence pushes us to go for the win, and hopefully we can do our best in the final so that we all can go home happy,” he said.

The ruling families and business houses in the UAE have announced several charter flights for the fans to reach Bahrain.The one-off flights by Emirates are a gesture to mark the UAE national team’s performance so far, the airline said in a Press release.“We have already taken the initiative to sponsor the Gulf Cup of Nations as we want to contribute to the success of the tournament and while strengthening relationships in the Gulf region,” Shaikh Ahmed bin Saeed Al Maktoum, Chairman and Chief Executive of Emirates Airline & Group, said in the release.

“We are proud that our national team has reached the final and we wish the best of luck to our players. On this special occasion, we are offering two extra flights tomorrow to fly fans, free of charge, to Bahrain in order to support their team,” he said.Their Highnesses Members of the Supreme Council Dr Shaikh Sultan bin Mohammed Al Qasimi, Ruler of Sharjah; Shaikh Saud bin Saqr Al Qasimi, Ruler of Ras Al Khaimah; and Shaikh Hamad bin Mohammed Al Sharqi, Ruler of Fujairah, have also ordered special planes for football fans.

Emirates NBD also announced an airplane for fans. “Passion for sport is a high priority at Emirates NBD, and when it comes to football and a question of national pride, we want to be right there to support the UAE team in any way we can,” Saif Al Mansoori, deputy head, group marketing & branding, Emirates NBD, said in a release.Telecommunications firm du has also announced a chartered plane for 350 fans. – KahleejTimes