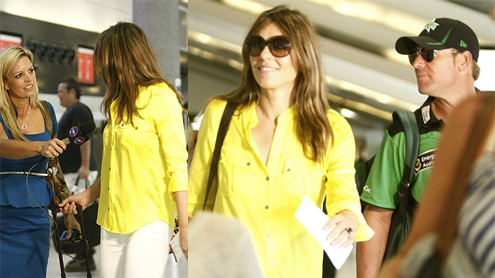 She usually comes across as well-spoken and polite.But it seems that when it comes to someone messing with her man, Elizabeth Hurley has a nastier streak if reports from Australia are to be believed.

The swimwear designer was caught on camera apparently telling a reporter to ‘f**k off’ at Perth airport after she approached them both to ask about Shane Warne’s cricket match which took place on Wednesday.The confrontation was caught on camera and although Elizabeth can’t actually be heard saying the expletive, it is clear she is trying to say something rather forcefully and her aggressive body language is more than apparent.A short while after the incident, the journalist in question, Caty Price, took to Twitter to reveal what she said happened.

She wrote: ‘Being pushed by Liz Hurley and then told to f#*k off by her too .. Fair to say the Stars aren’t happy this morning #bbl. In the video, Elizabeth is seen strolling through the airport with her sportsman partner Shane. The journalist is heard asking Shane questions about the Melbourne Stars’ game against the Perth Scorchers, while a grumpy-looking Shane steadfastly stares straight ahead, refusing to comment.Price then turns her attention to the former actress, who bumps into her, causing Elizabeth to snap that is ‘rude to stand in front of people’.Then she tries to question Liz which is when the model turns around and puts her face to close to hers. At which point Caty claims she said:  ‘I think you should…f**k off.’

Liz then turns around, flicks her hair and carries on walking as the journalist holds back looking rather shocked. Speaking to Tom Elliot on Drive, Caty, who is a Channel 10 reporter, said: ‘We went to the airport chasing Shane Warne about his performance in the cricket last night, and we got a lot more than we expected. ‘I asked Liz what she thought of last night’s game, all the sudden she responded by turning on her heels and coming back at me fairly close to my face, saying ‘I think you should F**k off.’

It is unclear why the star, who rose to fame for wearing a revealing dress, was quite so hostile towards the reporter.MailOnline has contacted a representative for the star for comment.Ahead of the incident she seemed in high spirits as she tweeted: ‘Goodbye to Perth! Thanku for amazing hospitality… v disappointing result for the Stars but great to spend time in another Aus city… Lots of thanks to the WACA for being so nice. We were looked after beautifully’ .She later added: ‘At the airport trying to resist the best pancakes.’ – DailyMail