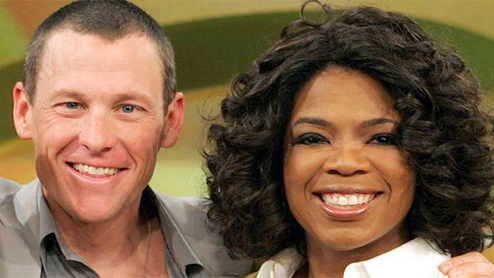 US cyclist Lance Armstrong will be interviewed by chat show host Oprah Winfrey, amid reports that he might publicly admit to doping.

Armstrong was stripped of his seven Tour de France titles by the sport’s governing body, following a report by the US Anti-Doping Agency (Usada).Winfrey’s OWN network said the 90-minute interview would address “years of accusations of cheating”.Armstrong has maintained his innocence as he received a life ban from Usada.But the New York Times reported on Friday that the 41-year-old was considering a public admission that he used banned performance-enhancing drugs. An admission could lead to an apparent bid to return to competing in marathons and triathlons, the paper reported.

The interview announcement was first made on Oprah Winfrey’s Twitter account on Tuesday, and confirmed when Armstrong retweeted it 15 minutes later.The interview – his first since being stripped of his wins – will be broadcast on 17 January on Winfrey’s OWN network and live-streamed online.

Armstrong ended his fight against doping charges in August 2012. In October, Usada released a 1,000-page report saying he had been at the heart of “the most sophisticated, professionalised and successful doping programme” ever seen in sport.He was stripped of his titles by the International Cycling Union (UCI) shortly afterwards and given a lifetime ban from the sport.Armstrong also resigned as chairman of the Livestrong foundation – the cancer charity he created – after the cycling body’s decision.

His lawyer, Tim Herman, has described the Usada report as a “one-sided hatchet job” and the cyclist himself has accused the agency of offering “corrupt inducements” to other riders to speak out against him.It is believed he is considering an admission because he wants to resume his athletic career, and has shown an interest in competing in triathlons.

Asked whether the 41-year-old was set to come clean, Mr Herman told the New York Times: “Lance has to speak for himself on that”.Separately, the head of Usada told a US investigative programme that Armstrong offered the agency a donation of some $250,000 in 2004, reports said.Speaking to 60 Minutes Sport, to be broadcast in the US on Wednesday, Travis Tygart said the offer was a “clear conflict of interest” and quickly rejected. – BBC