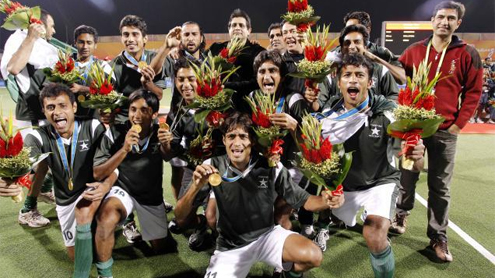 It was a close match, marred by controversy in the final few minutes, with India walking off the field in protest against a penalty corner that was not given. They came back on with two minutes left in the match as Pakistan held on to secure the win.Shafqat Rasool scored one while Mohammad Waqas and captain Mohammad Imran scored two goals apiece.

The Greenshirts opened the scoring in the seventh minute through a penalty corner scored by Waqas, but India equalised within two minutes through SV Sunil.Raghunath then gave his side the lead in the 21st minute as India went into half-time 2-1 up.In the second-half, the tempo of the game was much faster with both teams creating chances and Rasool soon gave Pakistan the equaliser in the 42nd minute.

Imran’s goal gave Pakistan the lead again but India pulled one back through Gurvinder Chandi to make the score 3-3. However, Waqas soon restored Pakistan’s lead in the 57th minute but Rupinderpal Singh scored yet another equaliser for the men in blue.Pakistan were awarded a penalty corner in the 64th minute which led to Imran scoring the winning goal.The tournament comprised six top teams from Asia – Pakistan, China, India, Oman, Malaysia and Japan.

Pakistan thrashed Oman in their opening match 8-3, followed by a 5-2 win over China, a 3-3 draw against Malaysia and lost 2-1 to India who they had beaten to clinch the bronze medal at the Champions Trophy earlier this month in Melbourne, Australia. Pakistan brushed aside Japan 5-2 in the final pool match to set up a clash with India.Meanwhile, Malaysia clinched the bronze medal after beating China 3-1. – Dawn