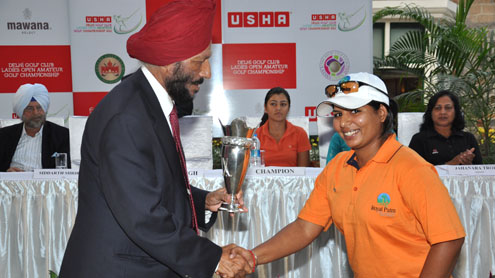 The 3rd Delhi Golf Championship Ladies Open Event was held at the historic Delhi Golf Club Golf Course and amongst the invitees to this championship were two upcoming caddie turned lady golfers of Royal Palm Golf Club,Zeb un Nisa and Ana James Gil and although this was their first international competitive exposure,Zeb un Nisa won the first prize in the net event.

And in the process she put many of the established ones in place,hitting accurate drives and demonstrating some beautifully executed pitch shots.Over the three rounds Zeb un Nisa had a net score of 50 in the first round,net 55 in the second round and net 50 in the final round.Her net aggregate score for the three days was 155 and brought her honors and a trophy titled as the Talwar Trophy.As for Ana James,she played good golf but missed the second prize by a single stroke.However she won the Longest Drive prize.

On their return to Lahore,yesterday via Wagah Border,Zeb said that she considers herself lucky to have got this oppurtunity to visit India and play amongst some outstanding golfers of India at the Delhi Golf Course which is lined with many Tughlak and Lodhi Dynasty monuments and is also home to 300 species of birds,and is a very challenging course.”We were really looked after well by our hosts in Delhi and the lady Captain Bubble Suneja even helped us take coaching lessons”,said Zeb.”I also thank Ramzan Sheikh Sahib of Royal Palm for having faith in our ability and affording us this chance to play in an international competition.Even in our dreams we have never thought of this”,Zeb went on to say.

Just three years back,these two ladies were inducted as caddies,based on an initiative by Royal Palm and at the beginning had little knowledge of golf.The basics were taught to them by a very experienced coach,Siraj Khan and after two and a half years of caddie duties they were allowed to take up golf as a game and within six months of training,visible was ample  golfing talent and ability which secured for them a trip to India.In the subcontinent they have created a record as they are the only lady caddies in Pakistan and India.On the occasion of the concluding ceremonies of the 3rd Delhi Golf Championship Ladies Open,the High Commissioner of Pakistan in India was present and he gifted them India Rupees ten thousand each.Some other ladies from Pakistan who won prizes were Ghazala Yasmin and Shahzadi Gulfam.