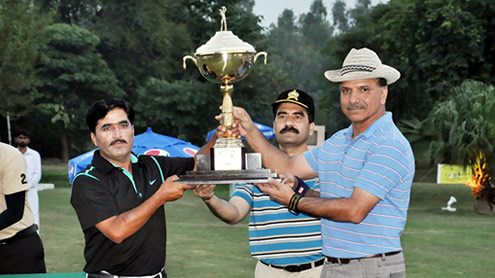 The Bank Alfalah Punjab Open Golf Tournament came to a thrilling  conclusion at the most fascinating par-72, Gujranwala Golf and Country Club Golf Course, as three courageous contenders, M.Tariq the triumphant one, M.Munir, the fierce  one and the new face Talat Ijaz fought it out to the last putt.

And in the final go M.Tariq had to produce an amazing  birdie on the final 18th hole to gain a one stroke advantage over M.Munir and a two stroke margin over the overnight leader Talat Ijaz and thereby emerge triumphant and become the holder of the Punjab Open Title 2012. It was a moment of glory for him and brought lusty cheers for him as Munir and Talat ended up distraught.

This title bearing event was a competition for the top golf champions of the country and in accordance with its importance the golf arena had been prepared exceedingly well and met the required standards and for this all credit to the inspirational support of Lt Gen Muzzamil Hussain, Corps. Commander, Gujranwala.

The heartening feature of this three days championship has been an overall inspired performance by the top professional golf players of our national golf circuit. More than thirty under par rounds were witnessed and on the final day the ultimate winner had to produce a round of five under par 67 to acheive a memorable win and a cash prize of over two lacs.

In the Amateur gross M.Rehman of Royal Palm was wonderful and captured the first gross prize with scores of 77, 70 and 73 and an aggregate of 220. Idrees Tinko of Rawalpindi came second with a three round aggregate of 223 and Sajid Khan of Karachi came third. The net section winner was Maj Asad Zia(Gujranwala), with Saleem Raza as runners up and Mohsin Zafar third.