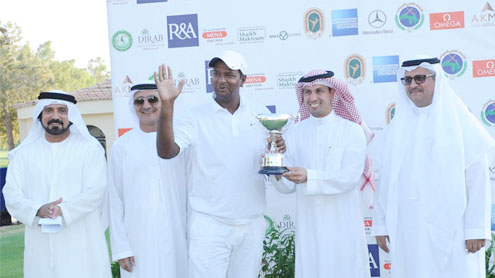 In the third  of six tournaments of the MENA(Middle East and North Africa)Golf Tour,that concluded at the Riyadh Golf Club  yesterdy,Shafiq Masih  of Pakistan and Lahore Gymkhana Club, captured  the American Express Dirab Golf Championship title after a playoff against Craig Smith of Wales.

In the final round nerves were strained to the breaking point as Shafiq Masih overturned a three shot final round deficit to level with Craig Smith and thereafter acheive victory in a playoff.What Shafiq Masih managed was heroic indeed as he dug deep into his knowledge of the golf course,a place where he had been teaching golf till a few years back, to match his tough rivals sizzling final round of gross 66.Just a little more hot and brilliant was Shafiq as he contested bravely to manage a score good enough to end up,level with Craig,thus forcing a play off.

Shafiq  Masih’s ardent and animated approach in the playoff hole fetched him a birdie as his rival barely managed a par.This enabled him to wrap up a moment of glory for his country,for his home club in Pakistan and for himself,besides a lucrative purse of  9000 dollars.As regards his performance on the  last day,he was simply irresistable from tee to the green.Masih rattled off seven birdies and 12 regulation pars.One bogie did come his way but then it was simply crushed under the weight of the birdies.

“It feels great to win a tournament of this stature and makes me more jubilant because it is  here that I used to give  golf lessons to members.No doubt I have won tournaments in Pakistan but this win is special”.Here in Pakistan Shafiq’s victory was applauded by Taimur Hassan of Pakistan Golf Federation,Brig(r)Akram of Punjab Golf Association and former sportsmen like Shafqat Rana,Jehangir Aziz and many golfers of significance. – Khaleejnews