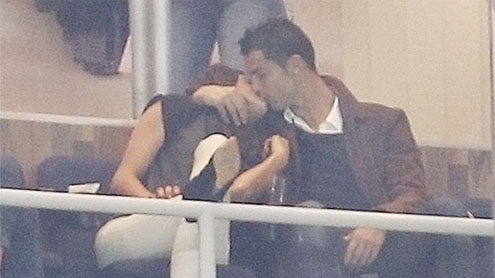 Ronaldo has voiced his unhappiness with his current team Real Madrid recently, but he certainly seems a lot happier off the pitch.

The 27-year-old striker was seen being cheered up by his stunning girlfriend Irina Shayk, as the pair enjoyed a passionate PDA in the stands while Real in action in Madrid.The pair gazed longingly at each other, before Ronaldo swooped in for a kiss and ended the amorous display with a huge grin on his face.Ronaldo and Irina failed to keep their hands off each other, and looked more interested in cuddling up to each other rather than watching Real take on an invited team in memory of the team’s late president Santiago Bernabéu.

And even when the pair weren’t indulging in some PDA, they kept themselves busy by looking at their mobile phones.Earlier this year, Ronaldo sparked speculation about his future with the Spanish football champions after he told reporters in January: ‘I’m sad – when I don’t celebrate goals it’s because I’m not happy. It’s a professional thing. Real Madrid know why I’m not happy.’Ronaldo may have missed some of the game, but it was a night to remember for the Real Madrid fans as they watched their team crush Millonarios 8-0, thanks largely to Brazilian forward Kaka, who scored a hat-trick and was named man of the match.

Despite his apparent unhappiness, Ronaldo has still been banging in the goals, and Arsenal manger Arsene Wenger has suggested his recent comments have been made because he’s not in the limelight as much.He wrote in his Eurosport column: ‘When you talk about Ronaldo, no matter where he goes, he wins things and at the end of the season scores 50 goals. Cristiano is a super player and these type of players often have great aspirations and strong egos, because they are not satisfied with being just average.

‘They want to be the best in the world and there is a price to pay for that. They have a certain aura which surrounds them and at times this distracts from the rest of the team.’All the great players love being in the spotlight, and when the spotlight is on just one player, the other players can’t be happy. The media chooses who to focus on and the others suffer.’ – Dailymail