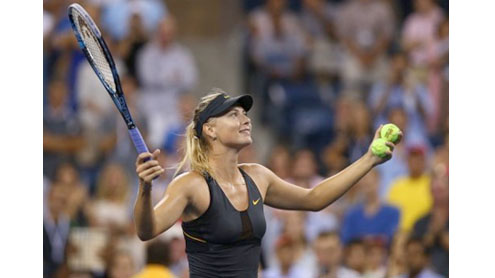 Djokovic coasted past French 30th seed Julien Benneteau 6-3, 6-2, 6-2 despite being forced to open up play on day seven at Arthur Ashe Stadium. In stark contrast, Sunday’s programme finished at 2.26 am on Monday morning, equalling the latest-ever finish for the tournament. That was the time when German 19th seed Philipp Kohlschreiber completed his 6-4, 3-6, 4-6, 6-3, 6-4 win over US ninth seed John Isner. Djokovic didn’t face a single break point in his 97-minute victory, firing 13 aces and 41 winners. The 25-year-old hasn’t dropped serve since the first game of his first-round match and has made the last 16 for a sixth successive year by losing just 14 games in three rounds.

He goes on to face Swiss 18th seed Stanislas Wawrinka, who eased past 14th-seeded Ukrainian Alexandr Dolgopolov 6-4, 6-4, 6-2 for a spot in the quarter-finals. American 20th seed Roddick delayed his retirement by advancing to the fourth round with a 7-5, 7-6 (7/1), 4-6, 6-4 victory over Italy’s Fabio Fognini.Roddick will play for a spot in the quarter-finals against 2009 winner Juan Martin Del Potro, the seventh seed from Argentina. Del Potro defeated 63rd-ranked compatriot Leonardo Mayer 6-3, 7-5, 7-6 (11/9) in a three-hour 20-minute marathon that was wrapped up on his sixth match point. Del Potro’s win in New York three years ago was the only occasion in the last 30 majors that the champion wasn’t Roger Federer, Rafael Nadal or Djokovic.

In the women’s draw, Maria Sharapova reached the quarter-finals for the first time since her 2006 championship run with a 6-1, 4-6, 6-4 victory over Russian compatriot Nadia Petrova. And defending champion Samantha Stosur of Australia set up a last-eight showdown with top seed Victoria Azarenka as both captured fourth-round triumphs on the Flushing Meadows hardcourts at the year’s last Grand Slam tournament.

Third seed Sharapova, who completed a career Grand Slam by capturing the French Open title last June, rallied after twice dropping four games in a row and having to sit through a 73-minute rain delay. Seventh seed Stosur squandered eight match points but finally subdued stubborn British teen prodigy Laura Robson 6-4, 6-4 in 98 minutes. She advanced to a quarter-final against an opponent she has never defeated, World No. 1 Azarenka of Belarus, who ousted Georgia’s Anna Tatishvili 6-2, 6-2, to reach her first US Open quarter-final. Sharapova will next face French 11th seed Marion Bartoli, who beat Czech fifth seed Petra Kvitova, the 2011 Wimbledon winner, 1-6, 6-2, 6-0, to book her first trip to the US Open quarter-finals at her 11th attempt.

But it almost fell apart for Sharapova when she surrendered a break in the last game of the second set and the second game of the third set just before rain arrived. That sent the players back to the locker room, where Sharapova spoke to coach Thomas Hogstedt. Sharapova broke back in the first game after play resumed and broke again in the seventh game. Stosur eliminated Robson, the first British woman in the last 16 at the US Open since 1991. Robson, an 18-year-old from England ranked 89th, had sent three-time US Open champion Kim Clijsters into retirement and 2011 French Open winner Li Na out of the event in the previous two rounds. But the youngest woman in the world’s top 100 finally faltered under the pressure of the reigning queen of the Flushing Meadows hardcourts. – Dailytimes