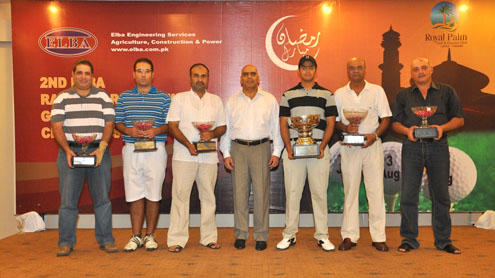 Munzir finished with a net score of 65 as against a net 66 aggregated by Faisal.In the last nine holes Munzir put up a determined effort and though he started off with a rather miserable looking eight on the 10th hole,he was brilliant thereafter,scoring impressive  pars on the 11th and 12th holes supplemented by a birdie on the 14th hole and thereafter another fluent par on the difficult par-4,15th hole tilting the golfing contest in his favour.Towards the end Munzir did not relent and his winning march could not be adequately countered by other strong contenders like Faisal Kari,Abdul Islam Nazir,Abdullah Sharif,Faisal Sayyed,Hussain Hamid and Ale Imran who played well enough but slightly lacking the winning flair.

Some of the other competitors could not make it to the top but succeeded  in winning  the subsidiary prizes at stake were Naseer Akhter who captured the nearest to the pin prize,and Waqar Yazdani Malik,longest drive of 282 yards.Jamal Mubtasim Malik got hold of the best nine holes net prize by playing exceedingly well and Faisal Kari was winner of the best nine holes gross.The overall winner in the gross event was Lt Col(r)M.Jameel Khalid.At the conclusion of the event Irfan Ali,Chief Executive of Elba Engineering awarded prizes to the winners in a well attended prize distribution ceremony.