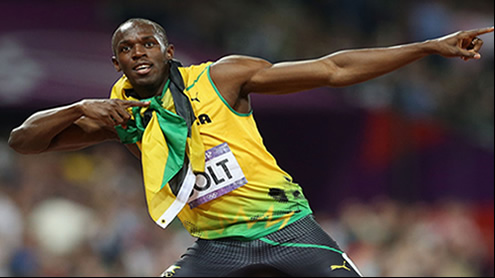 Usain Bolt won the 200 meters in 19.32 seconds Thursday night to become the first man with two Olympic titles at that distance.

Bolt beat countryman Yohan Blake by .12 seconds, and Warren Weir took third to make it a 1-2-3 sweep for Jamaica. The 25-year-old Bolt won the 100 on Sunday and now has five Olympic golds — a number he celebrated by hitting the ground and doing five push-ups a few meters past the finish line.

Bolt, who has long considered the 200 his favorite event, will try to make it 6-for-6 at the Olympics in the 4×100 relay, which starts Friday. The last country to sweep the 200 was the United States in 2004. -khaleejtimes