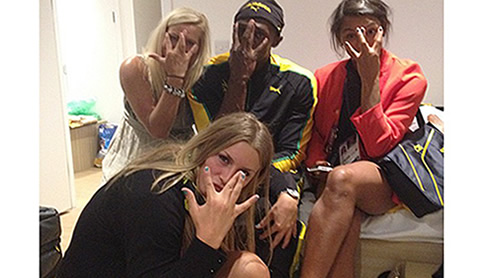 Bolt beat his training partner Yohan Blake to retain his 100m title and in the process set a new Olympic record of 9.63 sec.

The 25 year-old decided to enlist the help of Gabriella Kain, Isabelle Gullden and Jamina Roberts, who lost all five of their matches and finished bottom of their group in the handball tournament, to celebrate his victory.  The photo is slightly surprising considering that Bolt had insisted there would be no celebrations as he still has to try and retain his 200m crown. “This gold means I am one step closer to being a legend so I’m working toward that,” Bolt said. “That’s just one step, I have the 200m to go so I can’t celebrate.”

A Swedish newspaper reported that the trio asked Bolt’s coach for accreditation so that they could congratulate the sprinter and spent an hour-and-a half in the sprinting legend’s bedroom. The Swedish ladies were not his only admirers. After confirming his status as the fastest man on earth he even got a kiss from last night’s silver medallist in the 400m Christine Ohuruogu.-Telegraph