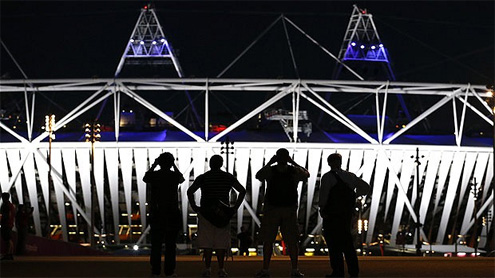 If Danny Boyle had handed out laughing gas and tax rebates at the penultimate run-through in Stratford he could not have got warmer reviews. Strangers when they got on the train, the spectators grinned and babbled wide-eyed to each other about what they had seen.  “It was jaw dropping”, “Amazing, I didn’t know where to look”, “It makes you really want to get behind them”.  A pact among those present prevented them sharing details. Boyle asked people to keep the secret before the show, and the hashtag #savethesurprise was displayed on the screens in the stadium. In the main, the covenant has held.

Searching out the hash-tag on Twitter on Tuesday revealed a community of enthusiasts sending virtual nods and winks like parents before the best Christmas presents are opened.  “Splendidly British and magnificently bonkers,” said one. “If you’ve got plans Friday night, cancel them. Opening ceremony is out of this world,” said another.  reaction, as well as the conspiracy of goodwill to keep elements fresh for the worldwide TV audience expected on Friday, is good news for London. Producing the ceremony has been fraught with problems for Boyle and his team, but the vision they have dreamt up, which gets its final rehearsal tonight, appears to pass the first test: the public like it.  Whether the politicians do is another matter. Boyle’s work, and that of ceremonies director Stephen Daldry, has always carried a strong political message amid the feel-good elements.

Both are strong Labour supporters, and there is growing expectation that their themes will not be welcomed by the Coalition, particularly its Conservative majority.  One senior figure who has seen the show is predicting “a political row”, and former Labour Foreign Secretary David Miliband seemed to be anticipating something similar. He tweeted after the show “Danny Boyle is a genius, with a wicked sense of humour!”  Boyle has always promised a singularly British show, and reaction from those present on Monday confirms it. We know it starts in a “green and pleasant land”, passes through the industrial revolution and a celebration of the right to protest, and the public service of NHS nurses, a theme thought to have caused nervousness in Culture Secretary Jeremy Hunt’s office.

It is also understood to feature another key element of British life, the big Saturday night out.  Telegraph Sport understands that a key device of the ceremony tells the story of two girls defying their parents to head out on the town, aided and abetted in meeting their friends by social media. Their journey takes them through nightclubs playing music from the great decades of British popular music, from the 60s to the Noughties.  The sequence nods both to our musical heritage, as well as Britain’s central role in the invention of the internet, with Tim Berners-Lee thought to feature.  Most of all, judging by the reviews, Boyle has injected the hardest element of all, humour, into the show. Many who’ve seen it talk of laughs and a madcap element. The ceremony has also made use of significant advances in digital media, and these are expected to provide the most spectacular moments.  These are said to have worked well in rehearsals, though there have been glitches with some of the mechanical staging. This is clearly no political tract, nor a po-faced historical tract.

Rather it is a spectacular, warm and, in places, emotional celebration of the UK. Whether it translates to the global television audience remains to be seen, but that could be less important than lighting the fire of the domestic audience.  Each Olympics is defined by the mood of the hosts, and nothing would spark the capital’s slow-burn enthusiasm, warming up nicely in the welcome London heatwave, like a show of which they can be proud.

Among the crowd at Friday’s opening ceremony will be around 250 British former Olympic medallists who have been invited at short notice, and may play a part in the proceedings.  The Olympic veterans were invited this month to fill a block of seats in prime positions close to trackside. They have been offered up to £150 in expenses and told that they should prepare to play a part in the ceremony. One option is that they will be recognised during the pre-show in the stadium, which starts at 8.12pm (20:12 on a digital clock) and act as a warm-up for the show proper, which starts at 9pm.  There is a suggestion among the invitees that they have been called up at short notice because Prestige, the corporate-hospitality provider, had failed to fill the seats, which are in a prominent position.

The belief has grown because the British branch of the World Olympians Association has been in discussions with Locog for several years about the possibility of being involved, but until the start of this month had been repeatedly rebuffed. Locog would not comment on the involvement of former British Olympians, but denied there was any link to tickets allocated to Prestige.

All 204 competing nations will be instructed to make sure that their athletes get a move on when they take part in the parade at the opening ceremony, as organisers try to hit a 12.30am finish.  The advent of smart-phones has turned recent parades into slow-moving affairs, described as “a shambles” by IOC member Dick Pound, as athletes take pictures and contact friends.  The chef de mission of the teams will be briefed on Wednesday and Thursday morning specifically on the need to keep moving, and IOC executive director Gilbert Felli said that there were “specific devices” in the show to ensure that teams keep up with the schedule.  These include a marching theme, composed by Underworld, that will be at a high BPM.  Locog is confident it has sufficient military personnel to get spectators in with no big delays. “We have confidence the queues on the night will be short and manageable,” chief executive Paul Deighton said.

Sepp Blatter’s presidency of Fifa, despite enduring corruption scandals, continues to appal many of his fellow International Olympic Committee members.  Veterans of the IOC’s Salt Lake City scandal are amazed that Blatter remains in his post despite, in their view, being subject to far more serious allegations than those that toppled former IOC president Juan Antonio Samaranch.  Blatter, for his part, remains unabashed, saying that the Queen had stopped IOC president Jacque Rogge introducing him at Monday’s Buckingham Palace reception. “She said, ‘I know him because of the football’. She has a wonderful memory.” -Telegraph