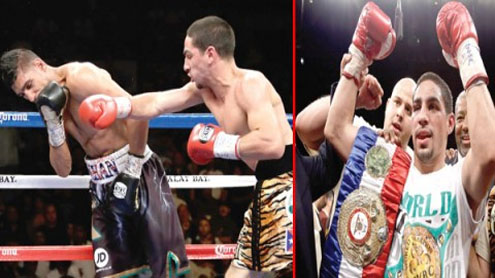 American Garcia scored three knockdowns with the end coming with 32 seconds left in the fourth round when referee Kenny Bayless stopped the bout.”I have always been overlooked, maybe it is the green eyes and the light skin,” said Garcia. “I look like a pretty boy. But I am a chiller baby and I will fight anybody, anywhere, anyplace.”Garcia, who already had the WBC title, now has 24 wins and no losses. Garcia, of Philadelphia, kept his perfect record intact by surviving the first two rounds before using a devastating left hook late in the third round that caught Khan flush on the right ear.

Garcia said he even surprised himself a little bit with the shot that changed the fight but it was one he worked on with his sparring partners during training camp.”I knew he was coming in so I slipped down and set up my left hook and just fired it,” Garcia said. “That is the same hook I hit (Erik) Morales with. We practised that in camp.”I feel great. I always knew I had it in me. I just needed the right fighter in front of me. I feel like the great fighters bring the best out of me and Amir Khan is a great fighter.”

Garcia, 24, was coming off a 12-round unanimous decision over Morales four months ago. Khan, of Great Britain, suffered just the third loss of his career.He managed to get up from the third-round knockdown and barely finished the round but he never fully recovered from that devastating left hook to the side of the head.”He caught me with a shot,” Khan said. “It was more of a blind shot, but I have always said ‘one punch can change a fight.'”Khan (26-3, 18 KOs) got knocked down twice more in the fourth round which had turned into a sslugfest with both fighters trading heavy shots in the center of the ring.

The second knockdown came when Garcia’s punch glanced off the top of Khan’s head, leading to an eight count.Khan said he lost his focus and it cost him the fight.”It just wasn’t my night. I made a few mistakes in there,” said Khan, who was in his eighth title fight. “I got caught with the left hook.”I watched the replay and I must have gone in there with my hands low a little bit and I paid my price.”Garcia (24-0, 15 KOs) got the better of the exchanges in the fourth, hitting Khan consistently with left hooks and counter shots, then finishing him off with a straight right hand that sent Khan stumbling across the ring.

When Bayless stepped in to stop the fight, the 25-year-old Khan protested and tried to duck under the referee’s arm.”I got complacent and I paid for it,” said Khan, who earlier this month was reinstated as the WBA light welterweight champ. Khan had lost the WBA and International Boxing Federation titles last December in a controversial split decision to Lamont Peterson.The decision to return the title to Khan came after Peterson failed a drug test.Garcia said his game plan Saturday worked perfectly.

“We knew he would come out fast and try to jump on me early because (Khan’s trainer) Freddie Roach thinks I am a slow starter,” Garcia said. “So I was going to slip shots and feel his speed and feel his power and after the third round I was going to step it up.”Khan is now the biggest trophy on Garcia’s unblemished record and this win could signal a jump for the American into the welterweight division where such stars as unbeaten Floyd Mayweather and Filipino icon Manny Pacquiao await him.”I want to fight the best. Whoever is out there,” Garcia said. – PT