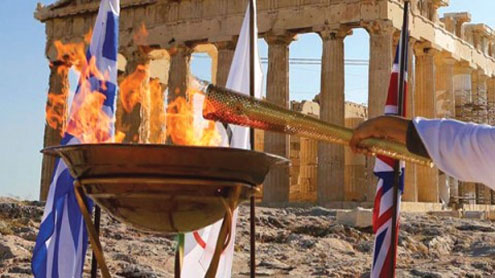 Greece hands over the Olympic flameto a London

ATHENS: Greece formally hands over the Olympic flame to a London delegation led by Princess Anne and including David Beckham on Thursday at the Panathenaic stadium where the first modern Games were held in 1896.

Seb Coe, chairman of the London organising committee LOCOG, spoke of a ‘massive, massive moment’ as the clock ticks down to the Games opening on July 27 while London Mayor Boris Johnson was typically ebullient.”It’s an amazing day for us. This is the moment when we prepare to take the torch and the eyes of the world are swivelling to London,” Johnson told reporters.”I think they will see a city that has made phenomenal progress in getting ready…by any measure, London is extraordinarily well prepared.”Princess Anne, daughter of Queen Elizabeth and a member of the International Olympic Committee (IOC) as well as a former Games competitor, will receive the flame from the president of the Hellenic Olympic Committee, Spyros Capralos, in the ceremony.

Greek president Karolos Papoulias, whose debt-stricken country risks bankruptcy and an exit from the European single currency, is also due to attend after naming a caretaker Prime Minister in an emergency government on Wednesday to lead Greece to new elections next month.
Former England soccer captain Beckham, born in east London where the new Olympic Park has taken shape, will play a role in the proceedings with five young Britons chosen for their commitment to sport and promoting Olympic values. The youngsters will join Princess Anne, who is president of the British Olympic Association, in receiving the flame.Greek rowing world champion Christina Giazitzidou will carry the flame into the stadium, built in 330BC and reconstructed for 1896, after it travels from its overnight perch on the golden rock of the Acropolis down through the centre of Athens.

The final two torchbearers will be Greek weightlifter Pyrros Dimas and Chinese gymnast Li Ning, who lit the cauldron at the 2008 Beijing Games.The lighting at ancient Olympia last week by an actress playing the role of high priestess brought bittersweet emotions for some of the spectators, emphasising how far Greece had fallen from its glorious past.Coe said the response to the torch relay around Greece since last Thursday had been extraordinary, despite the economic difficulties.”It’s reminded them that, for all the current challenges, you can’t expunge 28 centuries of history. This is uniquely theirs and a moment of celebration,” he said.

The flame will be kept overnight in lanterns at the British embassy in Athens and then flown on the golden-liveried ‘Firefly’, British Airways Flight 2012, to a navy base in Culdrose near Land’s End in south-west England.The 70-day, 8,000-mile (12,874-km) relay around Britain starts on Saturday and organisers hope it will spark an explosion of enthusiasm for the third Summer Games London has hosted.”This is really the beginning of the journey,” said Coe.”Once that flame starts its route…8,000 torchbearers within 10 miles of 57 million people over 1,000 villages, towns and cities, I think people will recognise that actually there is no turning back now. It’s theirs.” – PT