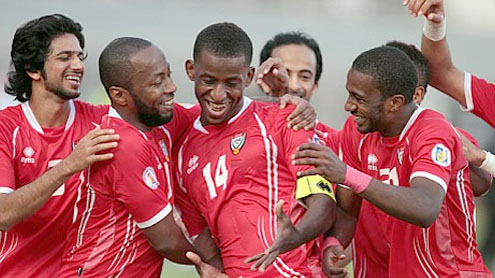 The UAE Olympic football team have been rewarded for qualifying for this summer’s London Games with a dream run-out against hosts Great Britain at Wembley Stadium.

Mahdi Ali’s men were drawn in Group A for the sporting showpiece, alongside Stuart Pearce’s side, Senegal and Uruguay, on Tuesday. They will begin their campaign at Manchester United’s Old Trafford ground on July 26 (Kick-off: 8pm — all times UAE) against Uruguay.The hallowed turf at ‘The Home of Football’ then beckons on July 29th (Kick-off: 10:45pm) prior to an August 1 showdown (Kick-off: 10:45pm) with Senegal, who were the last of the 16 teams to make it through with a 2-0 victory over Oman at Coventry City’s Ricoh Arena on Monday.

The UAE’s 23-man squad will then play in two of England’s most prestigious grounds and they could earn another game under the iconic arch or a trip to Cardiff’s Millenium Stadium should their adventure extend beyond three matches.he Group A runners-up face the Group B victors at Wembley on August 4th (Kick-off: 5:30pm), whereas the Group A winners tackle the second-placed Group B nation on the same day in Cardiff at 10:30pm. The two semi-finalists shall take place at Wembley (Kick-off: 8pm) and Old Trafford (Kick-off: 10:45pm) on August 7th, with the bronze medal final at  Millenium Stadium (Kick-off: 10:45pm).

The gold medal final will be at Wembley on August 11 (Kick-off: 6pm). Elsewhere, Group B consists of Gabon, Mexico, South Korea and Switzerland, while Belarus, Brazil, Egypt and New Zealand are in Group C. Group D contains Honduras, Japan, Morocco and Spain. – Khaleejnews