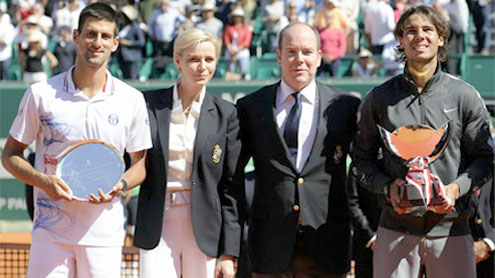 MONACO: Rafael Nadal finally managed to beat Novak Djokovic in a final, thrashing the top-ranked Serb 6-3, 6-1 on Sunday to win the Monte Carlo Masters for the eighth consecutive year and end a run of seven straight defeats to his rival in title matches.

He also now won a record 20 Masters titles, putting him one ahead of 16-time Grand Slam champion Roger Federer. Nadal was hardly troubled by Djokovic this time and broke the Serb’s serve five times in a totally one-sided contest to clinch his 42nd straight win in Monte Carlo, his first title since last year’s French Open and 47th of his career. “I always loved this tournament since I was a kid. One of my dreams was play here,” Nadal said. “It’s a historic tournament (where) you see all your idols when you are a kid playing here.”

The 25-year-old Nadal thrust his hands in the air after clinching victory in style with an ace that flew past the beleaguered Djokovic, who beat Nadal in an epic Australian Open final this year. “If you see the finals I win here, all the finals are against probably top-six players,” Nadal said. “That’s something that makes the victories even more difficult.” Nadal now leads their head-to-heads 17-14 but it was his first win against Djokovic since a group-stage match at the 2010 ATP Finals in London. The Serb had beaten Nadal in three consecutive Grand Slam finals and handed him his only defeats on clay last year. “Winning against Novak in (the) final after losing a few ones is important for me,” Nadal said. “My level of tennis was high during the last four matches.”

Nadal was also relieved to come through the tournament without further aggravating his troublesome left knee, having rested it and had treatment for three weeks before coming to Monte Carlo. “I am very happy because my knee is not limiting (my) movement. I can run 100 percent,” Nadal said. “You have pain, but (if) you feel you can run to every ball, (then) the pain never is a problem.” Djokovic, who has been playing through grief since the death of his grandfather on Thursday, said he felt emotionally drained and was unable to summon the mental strength he needed to dig deep against Nadal. “I definitely don’t want to take away anything from Rafa’s win. He was a better player,” Djokovic said. “But it’s a fact that I just didn’t have any emotional energy left in me.” “I’ve never been caught up in this kind of emotional situation before,” Djokovic said. “I’m just happy to reach the finals really under the circumstances. It’s been a very difficult week for me to go through mentally.”

Nadal had promised to be aggressive and, after Djokovic held his opening service game to love, the Spaniard was relentless in harrying the Serb all over the court. Djokovic struggled to find a rhythm, making 25 unforced errors to just 11 winners. Nadal, however, timed most of his shots to perfection, and pushed Djokovic further and further back. “I think today he played just enough to win,” Djokovic said. “I just wasn’t there. You know, I didn’t play well, play at all, you know. I just was out there trying to put the ball in the court.” The breezy conditions seemed to bother Djokovic more than they did Nadal, although the swirling winds were not as intense as Saturday. Nadal, the 10-time Grand Slam champion, found his range very quickly and broke Djokovic in the third game when the Serb’s backhand went wide.

While Djokovic held his next service game with great difficulty, Nadal won his to love to take a 4-2 lead. Djokovic was up 40-15 in the next but was surprised when a couple of mistimed returns from Nadal landed just in. That seemed to frustrate the Serb and he gave Nadal another break point with a sloppy backhand that went wide. The Serb saved it and then held with a beautifully weighted drop shot. But Nadal broke him again in the ninth game to take the opening set, with Djokovic yet again planting a backhand wide. A double break gave Nadal a 4-0 lead in the second set and Djokovic could not find a way back. – Dailytimes