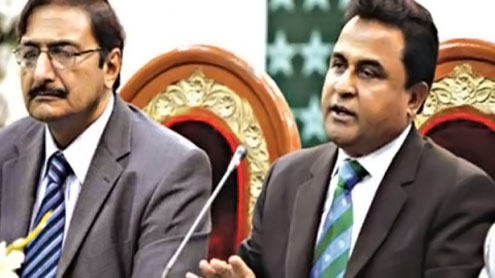 LAHORE: Pakistan Cricket Board chairman Zaka Ashraf have been successful in convincing Bangladesh to tour Pakistan later this month for two matches.

Bangladesh Sunday agreed to tour Pakistan for a short one 50-over match and one Twenty20 international later this month, reviving international cricket suspended in the country three years ago.”I am pleased to confirm the tour in which Bangladesh will play a one-day match on April 29 and a Twenty20 game the next day, both in Lahore,” Bangladesh Cricket Board president Mustafa Kamal said in a press release.International cricket has been suspended in Pakistan since a terrorist attack on the Sri Lankan team bus in Lahore in March 2009. The attack left eight people dead and seven visiting players and their assistant coach wounded.Pakistan’s government had promised fool-proof security for the Bangladesh team after their security delegation assessed the situation here last month.

Pakistan Cricket Board chairman Zaka Ashraf said the confirmation is a good sign. “I am extremely pleased that Bangladesh has confirmed the tour. Obviously this is very important for us and we will leave no stone unturned to ensure that this tour takes place in a befitting manner,” said Ashraf.Pakistan had been a ‘no go’ zone for international teams as they fear security of the players in a country where the national army is fighting militancy.Both the countries had started to show signs of bitterness after Bangladesh showed reluctance over the tour and Pakistan threatened to review relations if the tour doesn’t take place.

PCB further said the remaining matches of the FTP (Future Tours Programme) tour will be played at dates mutually agreed between the two Boards at venues including Bangladesh.Bangladesh was due for a full tour of Pakistan under the International Cricket Council (ICC) FTP in 2012.The ICC said it will need a comprehensive security plan from Pakistan to send match officials.”The ICC Board were informed that the tour will take place and the Board, having due regard to its duty of care to match officials and other ICC staff, requested that the PCB to immediately provide a comprehensive security plan for consideration,” the ICC said.

“Thereafter, the ICC’s Anti Corruption and Security Unit will commission a localised risk assessment to determine whether its officials and staff are appropriately protected by the proposed security plan, before any further decision is taken in relation to their appointment.”Last month, the ICC had announced a “special dispensation” to be made only in “exceptional circumstances” in order to ensure that a bilateral series take place even if the ruling body has determined it “unsafe” to appoint its officials for such series. This would allow such series to be manned by “non-neutral match officials.”

Kamal, who is a joint nominee of Pakistan-Bangladesh for the ICC vice president’s post in 2012, said the series will give Pakistani people some cricket.”The public of Pakistan have been deprived of cricket and we felt that we needed to support them. The reception we received when we toured Lahore and Karachi on our security visit was overwhelming.,” said Kamal.”This tour is taking place after 2009 and this short tour will hopefully demonstrate to the world that cricket should start taking place in Pakistan,” said Kamal.

Pakistan last year invited Bangladesh for a three-match one-day series which was later changed to two ODIs and one Twenty20 international. Karachi and Rawalpindi were the other possible venues but Bangladesh have agreed to playing in Lahore only.Even before the 2009 attacks foreign teams had refused to tour Pakistan since the war on terror began in the wake of 9-11 attacks in 2001 in the United States.Australia have not toured Pakistan since 1998, forcing them to play in Sri Lanka and Sharjah (2002), 2009 (UAE) and England (2010). Pakistan had also played their home series in New Zealand in 2009. – PT