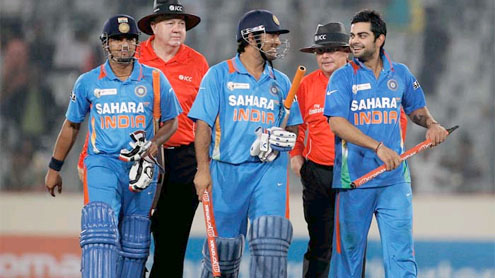 DHAKA: Virat Kohli scored 183 runs with Rohit Sharma adding 68 and Sachin Tendulkar 52 to lead India to a six-wicket victory over Pakistan in the fifth one-day international of the Asia Cup on Sunday.

Kohli amassed his total off 148 balls with 22 boundaries and one six. He came in at No. 3 after opener Gautam Gambhir was trapped lbw by Mohammad Hafeez for a duck on the second ball of the innings.Chasing a target of 330, India cruised to 330-4 with 13 balls to spare although it initially looked a difficult task against Pakistan’s bowling.Umar Gul was the best of the bowlers, returning figures of 2-65.Skipper Mahendra Singh Dhoni was unbeaten on 4 along with Suresh Raina not out on 12.

India has two victories in the tournament to keep its chance alive to qualify for Thursday’s final despite losing in a shock to Bangladesh on Friday.Pakistan has won both its previous matches and earned one bonus point for winning the match against Sri Lanka within the 80 percent time of the total match time. Sri Lanka has lost twice and will face Bangladesh on Tuesday. If Bangladesh can beat Sri Lanka its chance of playing the final against Pakistan would improve on the basis of a superior head-to-head record.

On Sunday, after Tendulkar was caught at slip by Younis Khan off Saeed Ajmal (1-49), Kohli partnered with Sharma to add 172 runs before Sharma was caught by Shahid Afridi off Gul.Kohli was the last man to go with India needing 12 from 17 balls to win. He was out caught by Mohammad Hafeez off Gul.For Pakistan, openers Hafeez and Nasir Jamshed smashed centuries as Pakistan reached a formidable 329-6 against India.Pakistan didn’t lose a wicket until Jamshed was out for 112 in the 36th over, leaving his team on 224-1.

Jamshed’s total came from 104 balls that included 10 boundaries and one six.Dhoni used eight bowlers but they struggled throughout the Pakistan innings after failing to make an early breakthrough.Hafeez scored 105 off 113 balls and Younis Khan added 52. Khan faced only 34 balls and hit six boundaries. Umar Akmal contributed 28 and skipper Misbah-ul-Haq was not out on 4.Ashok Dinda finished with figures of 2-47, while Praveen Kumar took two wickets for 77 runs after Pakistan won the toss and decided to bat first.

Earlier, India and Pakistan made one change each from their previous match lineups.India rested Ravindra Jadeja to include Yousuf Pathan, while Pakistan has brought in bowler Wahab Riaz for wicketkeeper Sarfraz Ahmed, with Umar Akmal taking the gloves.India must win to have any chance of qualifying for Thursday’s final after its shock defeat by Bangladesh on Friday.Pakistan has won both its matches and will progress to the final with another victory. Sri Lanka has lost twice and will face Bangladesh on Tuesday.India has won the Asia Cup five times, Sri Lanka four times and Pakistan once. – Arabnews