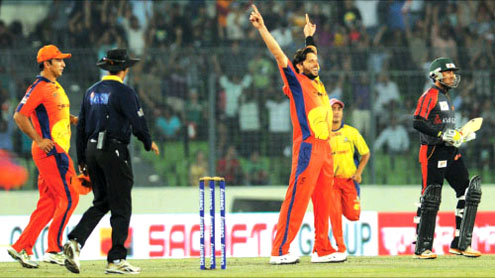 MIRPUR: The Dhaka Gladiators cruised to an eight-wicket win over the Barisal Burners to bring the curtains down on the maiden Bangladesh Premier League on Wednesday.

The Dhaka Gladiators, who won the toss and chose to field and this decision worked in their favour. The Barisal openers got off to a good start but the middle-order failed to capitalise. Brad Hodge was the top scorer with 70 runs off 51, as Barisal managed only 140 in 20 overs. For the Gladiators, Shahid Afridi was the pick of the bowlers, who took 3 wickets and Navedul-Hasan chipped in with 2 wickets.

However, the target wasn’t imposing and it the run-chase was made rather easy by the Gladiators’ batsmen. Opener Imran Nazir came out in an attacking frame of mind and slammed a 43-ball 75, that was studded with 6 sixes and equal number of boundaries. It was Nazir’s knock that gave the impetus to Gladiators chase and at the end Anamul Haque (49) saw his side through with 26 balls remaining. – Dailytimes