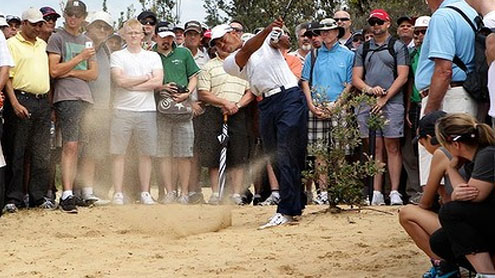 ABU DHABI: Tiger Woods talked all week about his improved ball control — then it let him down when he needed it most.

Woods resembled the Tiger of old over the first three rounds at the Abu Dhabi Championship, stringing together a trio of rounds below par before shooting an even 72 in Sunday’s finale to finish in a tie for third place behind winner Robert Rock and U.S. Open champion Rory McIlroy.The 117th-ranked Rock shot 70 for an overall 275 to beat McIlroy (69) by a shot. Woods was a further shot back with Thomas Bjorn (68) and Graeme McDowell (68). The 18-year-old Italian Matteo Manassero (69) and George Coetzee (70) of South Africa were another shot back.

“Today I just didn’t give myself enough looks at it,” Woods said. “Most of my putts were lag putts. I didn’t drive the ball in as many fairways as I should have … It was a day I was just a touch off the tee and consequently I couldn’t get the ball close enough.”It marked the second straight time Woods hasn’t won with at least a share of the lead after 54 holes. He failed to win the Chevron World Challenge in 2010 after going into the final round with a four-shot lead over McDowell.

The 14-time major winner appears to have recovered from a two-year victory drought in which he was sidelined by injuries and personal turmoil. But Woods must now face the fact that, at age 36, there are plenty of players — known and unknown — who can potentially beat him.Woods, though, was looking for the silver lining out of his third-place finish. He insisted he has been steadily improving — hitting a high percentage of fairways and greens until Sunday and putting much better.

“There’s plenty of big events to go, but I’m pleased at the progress I’ve made so far,” said Woods, who won the Chevron World Challenge last month to end his drought. “I just need to keep building, keep getting more consistent, and today was a day where I putted beautifully. Just didn’t give myself enough looks.”Coming into Sunday, Woods was tied for the lead with the unheralded Rock and was the clear favorite to win. Rock had only one victory under his belt compared to 83 for Woods worldwide, but it was Rock — battling his nerves over playing alongside one of his golfing idols — who held it together down the stretch.

“It’s pretty hard to believe that I managed to win today. Very surprised,” the Englishman said. “I played good. So I guess I had a chance from early on, a couple of birdies made the day feel a little bit easier.””But it’s difficult playing with Tiger. You expect almost every shot to threaten to go in. It felt a lot of pressure and couldn’t afford any lapses in concentration at all.”Woods started strong and it looked as though he might pull away from Rock, sinking a 40-footer on No. 2 for birdie and chipping to within a foot of the cup for a second birdie on the 3rd. But Rock didn’t blink, making birdie on two of the first three holes to keep pace.

Then Woods began to unravel.He started spraying his drives into the thick rough and fairway bunkers, resulting in bogeys on Nos. 4 and 5. When Woods wasn’t missing the fairways, he was scrambling to save par as he did on 11 after overshooting the green. As he approached his shot in deep rough just off the 11th green, he sighed heavily and let out a stream of obscenities under his breath.

Woods managed to save par by sinking a 12-footer and Rock just missed a birdie putt. Woods pumped his fist and appeared to be regaining momentum as he pulled within one shot of Rock on No. 13 when the Englishman had one of his three bogeys. But the 34-year-old Rock birdied two of the next three holes to regain control.Rock wobbled on the 18th when his drive landed in a pile of rocks near the water — forcing him to take a drop — but he recovered beautifully, reaching the green in four and two-putting for the win.

“I was just focusing on trying to hit fairways and then hit my iron shots as good as I have been and give myself chances at birdies,” Rock said. “Both Tiger and Peter struggled on occasions on a few holes and I managed to keep my ball in the right position and didn’t put myself under too much stress until the last, which was a relief.”It was a storybook ending for Rock, who rose from a club pro to join the European Tour in 2003 and only got his first tour win last year at the Italian Open. The victory will elevate him into the top 60.”It doesn’t get an awful lot harder than playing with Tiger Woods,” Rock said. “So I guess barring a major championship, I know I can handle that again. So that’s pretty nice to know.”

While most of the attention was on Rock and Woods, several players surged into contention down the stretch.McIlroy, playing ahead of Rock and Woods, birdied No. 18 to move to 12 under and give himself a chance. But he came up short with four rounds of par or better golf being undone by several costly mistakes — the worst coming Friday when the third-ranked McIlroy was penalized two shots for brushing away sand in front of his ball in the rough of the 9th.

“You know, you’ve got to take the positives,” McIlroy said. “It’s the first week of the year, and you know, it looks like it’s going to be the second year in a row here that I’ll finish second. But still a very good start to the season and something I’ll build on.”McDowell played the most exciting round of the tournament on Sunday, with an ace on No. 12, a chip-in on 13 and then a shot off the grandstand on the 18th that led to a birdie and a tie for third. For the 2010 U.S. Open champion, it was a good way to start the year after failing to win in 2011. – Yahoonews