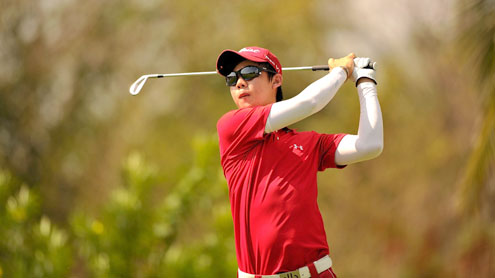 Cha Am, Thailand, January 18: Highly rated Atiwit Janewattananond of Thailand will have a battle on his hands at the Asian Tour Qualifying School Final Stage after shooting an opening round three-over-par 75 on Wednesday.

Atiwit, the youngest player to make the halfway cut on the Asian Tour at the age of 14 years and 71 days at the 2010 Asian Tour International on home soil, admits he is feeling pressured as he is five shots from the top-40 and ties.The Final Stage, presented by Sports Authority of Thailand, will be played over two courses at the Jack Nicklaus-designed Springfield Royal Country Club and Imperial Lakeview Golf Club. Players will play on alternate courses for the first two rounds while the final two rounds will be played at Springfield Royal.

Yosuke Tsukada of Japan fired a superb 63 at Imperial Lakeview highlighted by 10 birdies against one bogey to take a one shot lead over Englishman Guy Woodman. Spaniard Javi Colomo was in third place on 65 while Dodge Kemmer of the United States and Sushi Ishigaki of Japan were tied in fourth place on matching 66s. The 16-year-old Atiwit said he will need a herculean effort in the second round to haul himself back into contention of breaking into the safety zone. The top-40 and ties at the end of the week will earn a Tour card for 2012.

“I should have done a lot better. I’m feeling pressured at the moment because I know I need a good round tomorrow. I struggled with my putting and that ruined my round. Somehow my game fell apart when I couldn’t putt,” said Atiwit, who is currently in tied 168th position in the 240-man field.“Before the tournament, I was really very pumped up to do well but now I’m feeling very nervous. I really want my Tour card because there are so many players who grow on the Asian Tour like Noh Seung-yul, K.J. Choi and Simon Dyson and it is my goal to follow in their footsteps in the future,” added the Thai.

The story of the day belonged to Tsukada, who surprised even himself with his magical 63 where he needed only 25 putts.“It was a great round for me. I didn’t expect to shoot such a low score but I’m glad with my round. I sank many long putts and that certainly helped. I’m delighted with my round as it puts me closer to my dream of earning an Asian Tour card,” said Tsukada. Woodman, who plays on the mini tours in the United Kingdom, is eyeing to make amends after missing the top-40 and ties last year by one shot when he was penalized two shots for arriving late on the tee. It will be a case of make-or-break for Woodman this week as he considers the path of his career.

“This is a strong Tour as any. For me I think at the age of 34, if it doesn’t happen to me this year, it is never going to happen. I have a family back home and the support structure won’t last long. It is a big week for me and it will mean a lot to get my card,” said Woodman, who shot eight birdies, one eagle and one double bogey at Springfield Royal.Kemmer, who played mostly in Canada last season, overcame jetlag in a round of six birdies, one eagle and two bogeys. He was delighted with his fast start and believes playing in the Far East will help shape his career.

“I wanted to do something else and travel a bit more. I heard Asian Tour is a great Tour with good purses and competition so I decided to give it a try. It is a good way to play better because you are playing with different guys on different conditions each week,” said the 24-year-old.“The Asian Tour is also better than the Nationwide Tour or the smaller Tour in the United States. I always wanted to travel as part of my experience as a professional golfer so it was a win-win for me,” added the 2009 Scratch Player Amateur Champion.

Hamza Amin of Austria, the son of successful Pakistani amateur golfer and 2010 Asia Pacific Senior Amateur Golf Championship winner Taimur Hassan, also kept his dream of playing on the Asian Tour alive after shooting a 69. “There’s a very strong field out there but if you play good golf, the rest will take care of itself. I’m not putting any pressure on myself,” said Hamza, who grew up in Pakistan before going to his birth country in Austria to study and play amateur golf.