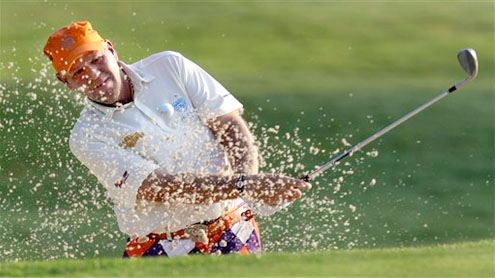 HONG KONG: John Daly’s relationship with Australian golf officials reached breaking point earlier this month when he walked off the course at the national open, but the twice major winner says there were mitigating circumstances surrounding his behaviour Down Under.

The 45-year-old, who is competing at this week’s Hong Kong Open, hit six balls into the water from the 11th tee in the opening round of the Australian Open before shaking hands with his playing partners, walking to the Lakes Golf Club car park and driving off in a courtesy car.Daly, who had been penalised two shots for hitting the wrong ball out of a bunker at the previous hole, said he had run out of balls, but that excuse cut little ice with the PGA of Australia, who withdrew his invitation to the November 24-27 Australian PGA Championship.

It was just the latest in a string of incidents in the country for Daly, who also smashed a spectator’s camera at the Australian Open in 2008.”I accept if you look at my past competing in Australia that the way I was treated was not harsh, but if they were to have looked at really what went on at the 10th hole then it was harsh,” Daly told reporters.”I had found the bunker with my tee shot and then when I got up there I hit a great bunker shot, and when I threw my caddy the ball to wipe it, I find it’s not my ball.”Then on the 11th it was my ego that got in the way and I thought we had plenty of golf balls.

“But the question I keep asking is what were range balls doing in the bunkers out on the championship golf course?”When I got to the bunker I thought it was my ball. I’m using Srixon balls and the balls on the range were also Srixon.”Everybody complimented me saying ‘great shot’ but when I get up there my caddy wiped the ball and threw it back to me but it wasn’t my ball.”So I go from making three there on that hole to a seven.”aly said the media had exaggerated the incident and denied that he had “stormed” off. Television footage shows Daly shook hands with playing partners Craig Parry and Hunter Mahan and walked back to the clubhouse.

“I shook hands with Craig and Hunter and said that I’ve run out of balls, and I said that also to an official and he said to me that is was unfortunate,” Daly added.”But what hurts me is that it was then reported I stormed off. Well, I never stormed off. I just walked back to the clubhouse.”Daly was fined an undisclosed sum over the incident and while his Australian PGA invite was revoked the American is still free to compete in Australia.”I didn’t get banned from Australia but I really don’t know what is going to happen in the future,” he said.

“There has been some talk after Craig Parry settled the matter down a bit, saying I didn’t do anything stupid and if it was him, he would have done the same thing.”I’ve looked at my past in Australia and I got upset with an official one year. Last year at the Australian PGA I was eight over par and I backhanded a putt, like we all do, and it popped out of the hole and I looked like a jerk then.”Then there was that guy with the camera in Sydney, but then Robert Allenby didn’t do me any favours. He defended me saying I did the right thing but then when he speaks to the press he says exactly the opposite.

“I wouldn’t have been so mad with that spectator with the camera but he was right in my face and cut my nose slightly with his camera.”But that guy had been warned all round long and the officials did nothing about him.”Daly is looking forward to playing in the $2.75 million Hong Kong Open and putting the events of the Australian Open behind him.”I feel as though I still have much to offer in this game. I will keep plugging along,” he added. – TOI