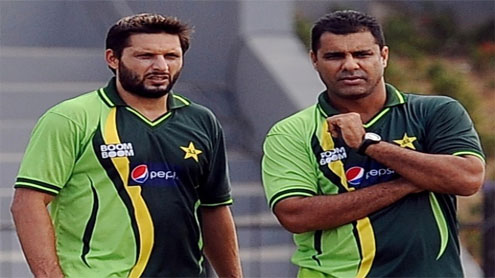 KARACHI (Agencies) – Shahid Afridi’s dispute with former coach Waqar Younis which cost him the captaincy of Pakistan’s cricket team has been resolved after the two met up during the recent series against Sri Lanka in the UAE.

Waqar confirmed that he met Afridi during the one-day series against Sri Lanka in Dubai and had a discussion on the differences between them. The dispute between the two star players erupted into the open after the Pakistan team’s tour to the West Indies this year.

Afridi, who was captain of the one-day side, on returning home lambasted Waqar for interfering in his domain and making his job more difficult. Later it was confirmed that the differences between the two had led to Afridi walking out twice from team meetings during the ODI series in the West Indies.
Afridi’s comments led to him being stripped as captain of the one-day side and his subsequent announcement of retirement in protest. The all-rounder returned to the side for the series in the UAE after Zaka Ashraf took over as Chairman of the board and gave a hearing to the former captain.

Although Waqar had stepped down as head coach of the team in September due to personal and health reasons, he was in the UAE for commentary work with the broadcasters of the series.”Look when you work together like I and Shahid did you have such difference of opinions and disagreements and that is exactly what happened with us. But in the end what is important is that both of us just wanted to see Pakistan cricket do well,” Waqar said. “The differences were mirrored because Shahid gave some statements in the press and I responded. But now it is normal between us.”
Waqar also made it clear that he stepped down because of his health problem. “It is a wrong impression that I made any excuse to step down and the real reason was that I was not happy with the board. The truth is doctors have advised me to stay away from jobs and work that carries lot of pressure as I am suffering from a liver ailment. That is why I resigned as coach.

“I am doing commentary now because it is not a pressure job and I can manage my health properly,” the former pacer said. The former captain said he was absolutely delighted with the performance of the Pakistan team. Nation