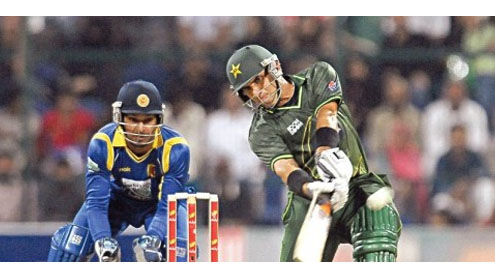 ABU DHABI: Pakistan put up another clinical performance to win the only Twenty20 by five wickets against Sri Lanka at Abu Dhabi stadium on Friday, blanking their rivals in all three forms of the game.

Paceman Aizaz Cheema took 4-30 to bowl Sri Lanka out for 141 in 19.3 overs before skipper Misbah-ul Haq kept his nerves with a fighting unbeaten 48 to help his team chase down the target with three balls to spare.The victory capped a remarkable performance by Pakistan who won the preceding three-Test series 1-0 and the five-match one-day series 4-1.Misbah, who hit three boundaries and a six off 38 balls, added 46 for the fourth wicket with Asad Shafiq (33) after Pakistan lost their way in persuit of the target.

They lost Mohammad Hafeez (13), Imran Farhat (13) and Umar Akmal for a first ball duck.Shafiq hit three boundaries during his run-a-ball knock before he was bowled by Lasith Malinga.Misbah hit Dilruwan Perera for a huge six and when 43 needed off the last four overs, the Pakistani captain hit three boundaries in Dilhara Fernando’s 17th over of the innings.

When Pakistan needed 23 off the last two overs Afridi hit Fernando for two sixes over deep mid-wicket before the paceman had him caught behind.Pakistan needed nine off the last over bowled by Malinga whose first ball saw two taken by Misbah but the ensuing throw went for four before Shoaib Malik knocked off the winning runs.Earlier Cheema took 4-30 in a superb display of swing bowling to derail Sri Lanka who had looked set to put up a big total on the back of maiden Twenty20 half-century by Dinesh Chandimal.

Chandimal had looked threatening during his 44-ball 56, hitting six boundaries and added a firey 31 for the second wicket with skipper Tillakaratne Dilshan (28) before Cheema came into his own.
Sri Lanka were off to a flying start of 30 by the third over before losing opener Upul Tharanga, bowled by Cheema for 12.Dilshan miscued a drive off spinner Saeed Ajmal in the sixth over but Sri Lanka still had a ten run avergae by the sixth over.

Pakistani bowlers led by Cheema, playing only his second Tewnty20 match, checked Sri Lankan innings as they lost their last seven wickets for 54 runs.Chandimal brought up his maiden half-century in the shortest form of the game off 40 balls before Cheema had him in the 19th over of the innings, trapped leg-before.Cheema also had Thissara Perera (nought) and Malinga (one) to finish his four-over spell.

Sri Lanka’s poor batting was not helped by two run outs of Angelo Mathews (14) and Chamara Silva (four). Umar Gul polished off the tail with 2-16.Pakistan fly off to Dhaka on Saturday to play a Twenty20, three one-day internationals and two Tests. The Twenty20 will be played in Dhaka on Tuesday. – PT`