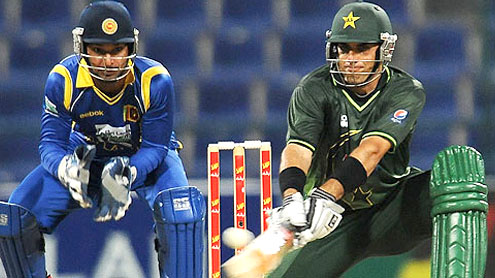 Misbah hit an attractive 66 while Akmal finished on an unbeaten 61 to help Pakistan made light work of the Sri Lankan total of 218-9 as they reached home in 47.2 overs to take the five-match series 4-1.The victory, followed a 1-0 win in the three-Test series, lifted Pakistan to fifth in the International Cricket Council’s one-day rankings.

Misbah added 62 for the third wicket with Younis Khan (34) after Pakistan lost openers Mohammad Hafeez (14) and Asad Shafiq (26) in a shaky start.Even when leg-spinner Jeevan Mendis removed Younis and Shoaib Malik — both trapped leg-before — off successive deliveries, Misbah and Akmal made sure Pakistan finished on the winning side.

Misbah, who hit five fours during his 99-ball knock, found an able ally in Akmal, who helped his skipper add 84 for the fifth wicket before the Pakistan skipper miscued a reverse sweep off Mendis, who finished with 3-36.Akmal, who hit eight boundaries during his fiery 60-ball knock, made sure Pakistan did not lose track by hitting the winning boudary.

Earlier, Kumar Sangakkara scored 78 and Angelo Mathews made 61 during their innings-repairing fifth-wicket stand of 118 before Sri Lanka faltered, with only a late-order batting fightback helping them to a competitive total.

Sri Lanka were reduced to 46-4 after they decided to bat under overcast conditions that the Pakistani seam attack took full advantage of, grabbing four early wickets by the 11th over.Paceman Sohail Tanvir, who took 4-34, had opener Upul Tharanga (three) and Dinesh Chandimal (seven) in his first spell, while Umar Gul accounted for Sri Lankan skipper Tillakaratne Dilshan (12) — all three caught behind the wicket.

First change Junaid Khan dismissed Chamara Silva (one) to leave the fight to Sangakkara and Mathews, who slowly built the innings against some quality pace and spin bowling.

Sangakkara hit eight boundaries during his 99-ball knock — his 67th one-day half-century — before he miscalculated a drive off spinner Mohammad Hafeez and was caught at extra cover by Misbah-ul Haq.

Mathews, who hit two boundaries and two sixes off 101 balls, was bowled round his legs by off-spinner Saeed Ajmal.Thisara Perera (25) added 34 runs for the eighth wicket with Seekkuge Prasanna, who made eight not out.Pakistan, who won the first, third and fourth matches in the series, rested opener Imran Farhat, Aizaz Cheema and Sarfraz Ahmed to bring in Tanvir, Khan and Shafiq.Sri Lanka were forced to bring in Silva for Mahela Jayawardene, who returned home due to a knee injury.

U. Tharanga c Akmal b Tanvir 3

S. Prasanna not out 8

Umar Akmal not out 61

Saeed Ajmal not out 0