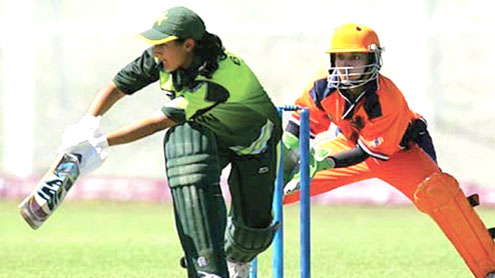 Pakistan Women produced a dominant display in their International Cricket Council (ICC) World Cup Qualifier play-off against Netherlands by 193 runs to ease into the semi-finals and also secure a berth at the 2013 World Cup as well as next year’s World Twenty20.

Opting to bat first, Pakistan lost Qanita Jalil with just 17 runs on the board. Nida Dar, who had scored a century in the previous outing against Japan Women, combined with captain Sana Mir in a 97-run second-wicket partnership.After Mir was dismissed for 49, Bismah Maroof stepped in to continue the good work along with Dar who was eventually dismissed for 57, while Maroof remained unbeaten with 66. Javeria Khan scored a quick-fire 67 off 53 balls to take Pakistan to an imposing 277 for four.

In reply, Netherlands lost wickets at regular intervals and only two batters reached double figures. Jalil took two early wickets, while Maroof and Dar also claimed three wickets apiece. Netherlands were eventually bowled out for 84. Maroof was declared player of the match.Pakistan now take on South Africa in the first semi-final tomorrow. Meanwhile, Sri Lanka defeated Bangladesh by six wickets to also confirm their place in the semis where they will face West Indies. – Thetribune