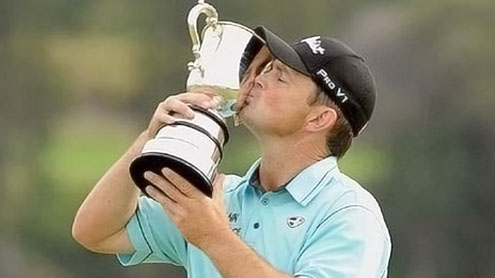 SYDNEY: Greg Chalmers swooped under the radar to capture his second Australian Open by a shot and prolong Tiger Woods’s tournament drought at The Lakes in Sydney on Sunday.

A controlled final round of three-under par 69 left the Australian left-hander with a 13-under total of 275, one clear of compatriot John Senden with former world number one Woods a further shot behind in third.Overnight leader Senden fought back from four bogeys in his opening seven holes to leapfrog Woods to second spot with a 72 for a 12-under 276. Woods, a 14-time major champion, had a closing 67 for an 11-under 277 which means he has still has not won a tournament since the 2009 Australian Masters.

It was the second success in his national Open for Chalmers after he won at Royal Adelaide in 1998 and it was only his third win on the Australian PGA Tour along with two victories on the secondary US Nationwide Tour. “I am extremely excited to have won this tournament twice and against one of the strongest fields we’ve had in Australia for a long time,” Chalmers said.“To get it done over the last two days and shoot eight under on the weekend that really floats my boat, that’s very exciting for me. “I’ve got my name twice on the Stonehaven Cup, that’s phenomenal.” Chalmers, ranked 215 in the world, was runner-up when Woods won his last tournament at the Australian Masters two years ago at Melbourne’s Kingston Heath.

Woods said: “I figured I needed to shoot at least 31 on the back nine to give myself a chance and I thought 13 or 14 (under) was going to be the number that I had to get, but unfortunately I made a mistake at the 13th.” He added that it was encouraging to be challenging in the final round of a tournament again after an injury-plagued year. “I had the lead at Augusta (Masters) on the Sunday, that’s the last time I’ve been in that spot, so it’s been a long time,” he said. “Unfortunately, I haven’t played a lot of tournaments in between, but it was great to be out there and I had a chance, unfortunately I didn’t post the number I needed.”

Chalmers hit the front at the day’s third hole and held it together for a notable victory over a field stacked with US PGA Tour stars, here for next week’s Presidents Cup at Royal Melbourne.Chalmers remained steadfast over the closing holes to maintain his advantage as Senden had a fleeting chance on the last to force a playoff. Defending champion Geoff Ogilvy had the day’s best round of seven-under 65 to finish joint fourth with American Nick Watney, Adam Scott, Nick O’Hern and Jason Day on nine-under 279. – Dailytimes