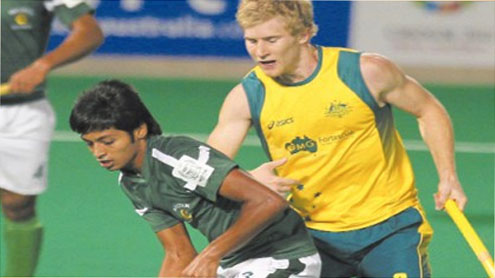 Shoail Abbas, Muhammad Touseef, Muhamamd Imran and Shakeel Abbasi scored the goals for Pakistan. The third team of the tournament was India. Australia defeated Pakistan in the two round matches while they played draw with India. However, in the final Pakistani team displaced brilliant performance and outclassed Australia to lift the trophy.

Pakistan are the ninth ranked team in the FIH’s latest rankings while Australia are at the top of the table. Sohail Abbas showed that he still has a lot of fire in him, Shakeel Abbasi showed glimpses of his class and other scorers Mohammad Imran and Muhammad Tausif gave their hearts out to pull out this improbable win for the greenshirts.

Pakistan beat Australia by 4-3 in the final to claim the title. In a message to Pakistan Hockey Federation President Qasim Zia, Zaka said: It’s a matter of great honour that the national team won the hockey title against one of the best teams of the world. Its is under your leadership the game of hockey is flourishing and I congratulate you and the hockey team for this achievement and wish that the green shirts keep bringing laurels for the country and bring back the lost glory.”

Earlier, Australia handed India a 1-2 defeat in a friendly hockey match on Thursday, ending a thoroughly disappointing trip Down Under for the team.India were previously supposed to play for the bronze of the just concluded tri-nation Challenge, meeting the new entrant Australia A.
However, the organisers decided to hold a Test match as only Pakistan and Australia’s senior team figured in the tri-nation apart from India.A strong Australia led by Fergus Kavanagh was too much for India to handle.

The defence which held its own most part of the match — the Indians managed to ward off five penalty corners on the trot in the first half — fell apart in the closing minutes.Goal-less at the lemon break, Daniel Hotchkiss gave finishing touches to a move by Tim Bates to give Australia the lead. Sandeep Singh, who had till them missed three penalty corners, finally struck to equalise for India.

It seemed that the match would end in a draw but the Indian defence began to crumble in the last five minutes, conceding long corners in numbers.Indian forwards again came a cropper upfront, failing to convert good moves into goals. At the same time, barring the last 10 minutes of the first half, in which Tim Bates missed four of the five penalty corners he took, the Australian team was on the backfoot.Gurbaj Singh, Arjun Halappa, Sardar Singh, and Ignace Tirkey set up many chances for the forwards but they failed to score, fumbling in front of the goalmouth.

After nearly a three week tour, the Indians will now return home. After a brief rest, they will assemble for a camp in Pune.”Our next target is the Champions Challenge in South Africa late November. The area is about 300 Meters above sea level. We have high altitude training facilities in Pune, we are therefore going to have our camp there,” said chief coach Michael Nobbs.