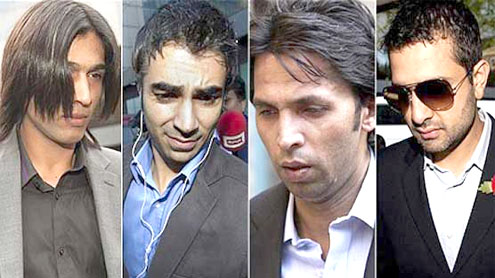 The judge also turned down Mohammed Amir’s mercy appeal. The judge also said all the accused hatched this conspiracy for monitary gain. Earlier, A London judge was to hand down sentences Thursday against three Pakistani cricketers convicted of fixing part of a Test match, a day after allegations of more widespread corruption emerged in court.Judge Jeremy Cooke has decide the fate of former Test captain Salman Butt and fast bowlers Mohammad Aamer and Mohammad Asif, as well as agent Mazhar Majeed at a hearing at London s Southwark Crown Court from 10:00 am (1000 GMT).Each defendant could have been hit with unlimited fines, up to seven years for conspiring to accept corrupt payments and two years for conspiring to cheat by pre-arranging no-balls for shadowy South Asian betting rings.

The scandal, surrounding fixed events at the August 2010 Test at Lord s between hosts England and Pakistan, has rocked the world of cricket, a sport founded on fair play ideals.As their lawyers pleaded for their clients during a hearing on Wednesday, new claims emerged, with allegations and counter-claims flying across the packed-out courtroom.The players  agent, Majeed, who it emerged had earlier pleaded guilty over the scam, claimed that the extent of the corruption in the Pakistan team went beyond the current case.

His lawyer Mark Milliken-Smith claimed that Butt had first raised the idea of spot-fixing, adding that his client had been “absolutely amazed” when the former captain had sounded him out. Majeed, 36, was caught in a sting when he took 150,000 ($240,000, 175,000 euros) from an undercover newspaper reporter to lay on rigged events.Milliken-Smith said his client had paid out 65,000 to Asif, 10,000 to Butt and 2,500 to Aamer, explaining that the larger amount was paid to Asif to ensure he did not switch to another fixing racket.Lawyers for Butt and Asif dismissed the claims about the cash.

Milliken-Smith said Butt had approached the agent at the 2009 Twenty20 World Cup, complaining that junior teammates had more lavish lifestyles because they were into illegal fixing.In January 2010, Butt and another unnamed player told Majeed they wanted to be involved and at another meeting in February, they said they wanted to add more players to the scheme, the lawyer told the court.Majeed was introduced to an Indian bookmaker called Sanjay and it was agreed that the agent would be the middle man between the bookie and the cricketers.Majeed “was, we respectfully submit, yes, the arranger for the players. He was not the corruptor”, his lawyer said.Ali Bajwa, the lawyer for 27-year-old Butt, said his client knew his career was over and he now stood to lose his family too — but he denied Butt initiated the scam.

Appealing for a suspended sentence, he said Butt had been left almost broke by the scandal and had gone from a “national hero to a figure of contempt”.Asif s lawyer meanwhile said it would be “laughable if it were not so serious” if one no-ball was to ruin the 28-year-old s career.In a statement read to the court, Aamer, 19, said he had been put under pressure to cheat and had feared for his future in the national side if he did not get involved.

“I want to apologise to Pakistan and to everyone that cricket is important to. I do know how much damage this has done to the game, the game which I love as well, more than anything else in the world,” he said.But the judge dismissed claims that Aamer was only involved in one episode of spot-fixing, citing suspicious text messages from murky contacts in Pakistan before the preceding Test match at The Oval.Meanwhile, a court in Pakistan has also ordered to file a case against three convicted players. The court has further said that the properties and ill-gotten money of these cricketers should be confiscated. – Dunyanews