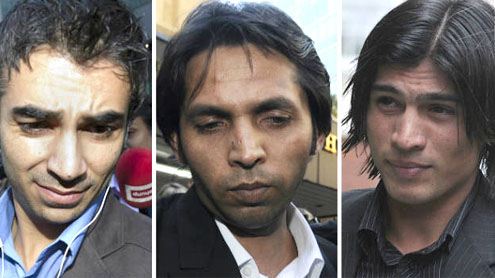 Three Pakistani cricketers found guilty of corruption pleaded for leniency on Wednesday ahead of their sentencing in a British court.

Former national captain Salman Butt and bowlers Mohammad Asif and Mohammad Amir will discover their fate on Thursday, along with agent Mazhar Majeed.Majeed, like Amir, pleaded guilty after being caught accepting money from an undercover newspaper reporter to “spot-fix” outcomes during a Test match against England at Lord’s in August 2010.Butt and Asif unsuccessfully tried to overturn charges that they both conspired to cheat and accept corrupt funds from Majeed, having been accused of agreeing to deliver three no-ball deliveries at specified times during the match.

Amir, a rising star in the sport at the age of 19, outlined his remorse in a statement read by his lawyer.”First I want to apologize to Pakistan and to everyone that cricket is important to,” he said. “I do know how much damage this has done to the game, a game which I love more than anything else in the world.”I did decide many months ago that I wanted to admit that I deliberately threw two no-balls at the Lord’s Test last summer. But I know this was very late and I want to apologize for not saying it before. I didn’t find the courage to do it at the beginning, and I know very well that made everything much more difficult.”

The Pakistanis are among the lowest-paid of the main cricket nations, partly due to the loss of much-needed revenue from hosting tours. International teams have refused to visit due to security fears since the terrorist attack on the touring Sri Lanka side in Lahore in 2009..Amir became the youngest player to take 50 Test wickets last year, but has been banned by the International Cricket Council until 2015.”Last year was the most amazing year of my life, but also it was the worst year. I got myself into a situation that I didn’t understand,” he said.”I panicked and did the wrong thing. I don’t want to blame anyone else. I didn’t want money at all. I didn’t bowl the no-balls because of money. I got trapped and in the end it was because of my own stupidity.

“My dream was to be the best cricketer in the world. I’m a competitive sportsman and those two no-balls were the only moments in my cricketing life where I have not performed to the very best of my ability. And they were not moments I felt happy to be part of.”The 27-year-old Butt missed the birth of his second son on Tuesday, with the arrival coming an hour before the verdict was read.His lawyer said the player had been financially ruined by the scandal, as he would be unlikely to make a comeback when his five-year ICC ban expires.

“He’s lost the captaincy of the Pakistan cricket team and this was a job he had for five weeks, they won two Tests, and this was the greatest honour of his life,” said QC Ali Bajwa said.”He has gone from a national hero to a figure of contempt and his ignominy is complete. He does not want to be the cause of his wife’s suffering. He now has only his liberty and his family left to lose.”Asif, who turns 29 next month, has already had his career interrupted by three drug scandals. The most recent resulted in a one-year ban which ended in 2009.”After five years out of the game, a comeback then would seem out of the question. He leaves here a broken man,” said his lawyer Alexander Milne. – CNN