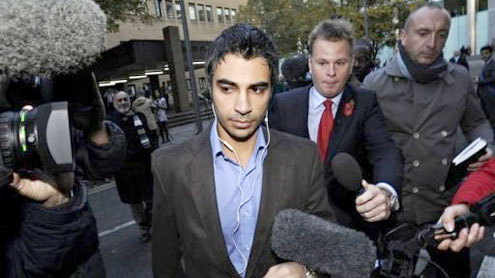 Pakistan cricketers Salman Butt and Mohammad Asif faced jail after they were found guilty of fixing parts of a Test match against England in a case that has rocked the international game.

And after the verdicts were handed down by a jury at a packed Southwark Crown Court in London, it emerged that young Pakistan bowler Mohammad Aamer had admitted the same charges two weeks before the trial of his teammates.All three were convicted of deliberately bowling three no-balls during the Lord’s Test in August 2010 as part of a “spot-fixing” betting scam uncovered by Rupert Murdoch’s now-defunct News of the World tabloid.Prosecutors said Butt, Asif and Aamer had conspired with British agent Mazher Majeed to bowl the no-balls as part of a plot that revealed “rampant corruption” at the heart of international cricket.

The world of cricket reacted with dismay to the worst fixing scandal since South Africa captain Hanse Cronje in 2000, but said the verdicts would send an important message that cheats would not be tolerated.International Cricket Council chief executive Haroon Lorgat said the organisation “takes no pleasure from the fact that these players stepped outside not only the laws of the game but also of the country in which they were participating.”

Butt, 27, and Asif, 28, were each convicted of conspiracy to obtain or accept corrupt payments, and conspiracy to cheat at gambling. They had denied the charges.They and Aamer, 19, all face up to seven years in jail when they are sentenced later this week.

The jury deliberated for nearly 17 hours to reach verdicts on both charges against Butt and the cheating charge against Asif, then needed a further three hours to convict Asif on the corrupt payments charge.The ICC has already banned Butt for 10 years with five suspended, Asif for seven years with two suspended, and Aamer, 19, for five years straight after finding them guilty of corruption in February.Lorgat confirmed that Tuesday’s decision would not affect the existing bans.In a twist for Butt, his wife gave birth to a baby boy just 30 minutes before Tuesday’s verdict was delivered, his father said by telephone from Pakistan’s eastern city of Lahore. Butt already has one daughter.

“It’s a matter of great grief for us that Butt has been found guilty. We hope the Almighty will bring him out of this trouble because these are very difficult times for him and the family,” Zulfiqar Butt told AFP.During the three-week trial the jury heard that vast sums of money could be made by rigging games for betting syndicates, particularly in South Asia, and that the problem was threatening the game of cricket.

Mazher Mahmood, News of the World’s former investigations editor, known as the “fake sheikh” for his disguises, told the court he had approached Majeed pretending to be an Indian businessman.Majeed, 36, has also been charged with the same offences but was not standing trial. – Bangkokpost