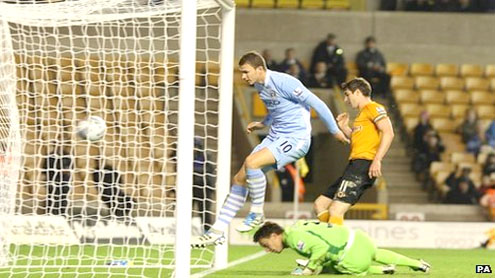 Manchester City reached the last eight of the Carling Cup after their lethal attack made light work of Wolves.

Wolves took a shock lead when Nenad Milijas smashed in before Adam Johnson equalised from the edge of the area.It was 3-1 four minutes later when Johnson’s ball was tucked home by Samir Nasri before Edin Dzeko tapped in.A Dorus De Vries own goal extended the lead and Dzeko turned in the fifth before Wolves’ Jamie O’Hara converted Stephen Ward’s ball from the left.Five more goals from City meant that the Manchester club have scored 15 goals in their last three games.

They started poorly though as Wolves took the lead before the game was turned on its head in four madcap first-half minutes.Mick McCarthy’s men looked more potent during much of the first 45, with David Edwards heading over from two yards before Milijas hammered his side into the lead with 18 minutes on the clock.

City then stepped up their performance which up until the 37th minute seemed to be basking in the afterglow of their 6-1 win at Old Trafford.Without rested central midfield maestro David Silva, City relied on the flanks to provide the threat.It was Kolarov, on the right, who provided the cross which led to the equaliser. Dzeko controlled the delivery in the area and laid the ball back to Johnson who let fly from the edge of the area.

Almost straight from the restart, City were ahead. This time, Johnson played quarterback with a pass that split the Wolves defence and found Nasri who slid his shot past De Vries.The turnaround was complete moments later when Johnson swung in a cross from the right and found youngster Luca Scapuzzi.

The Italian’s shot from two yards was blocked by Wolves stopper De Vries but the follow-up was stuck in by Dzeko.If the fans inside Molineux thought the first half was entertaining they were in for another ‘goalfest’ after the break.City extended their lead with five minutes of the half played when Scapuzzi pounced on a rebound from Nasri’s shot to tuck in from two yards out.

However, the 20-year-old’s strike was later given as a De Vries own goal with the ball having crept in off the body of the keeper.City’s fifth came shortly after and it was arguably the best goal of game. Nasri played a one-two with Dzeko before finding Stefan Savic on the left of the area.The Montenegro player found Bosnia striker Dzeko who tapped in.Game over, but it was not the end of the entertainment.Wolves reduced the arrears a minute later when O’Hara converted from six yards out after he was fed by Stephen Ward.

Several spills by City’s stand-in keeper Costel Pantilimon meant that the visitors had to work hard up until the final whistle, but there were no more goals on what was a thrilling night of action.Wolves manager Mick McCarthy:”That was an abject lesson in finishing. But I was pleased with our performance.”That sounds crazy when you’ve just been beaten by five, but I was happy.”We started well, and deserved the lead. The fact we didn’t hang on to the lead was nothing to do with defending badly.”City are all top players. They won’t be made to work harder than they were tonight, that’s for sure. – BBC