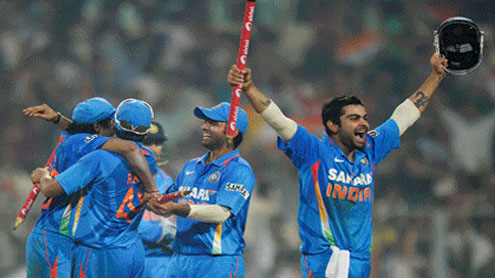 Dhoni struck an unbeaten 75 to lift India to 271-8 in 50 overs and Jadeja bagged 4-33 as England was bowled out for 176 in 37 overs.England was solidly placed at 129 for no loss at one stage with Craig Kieswetter (63) and Alastair Cook (60) striking fine form, but lost 10 wickets for 47 runs to crash to another humiliating loss.India, playing in the series without several prominent players including Sachin Tendulkar, Virender Sehwag, Yuvraj Singh and Zaheer Khan, completed a memorable series victory in the aftermath of a disastrous tour of England when it failed to win a single game.

“I would not say this was a revenge series, rather more about us achieving our goals,” India captain Dhoni said. “I think England is a talented side but its batting just did not click.”It was another forgettable day for England as the quick dismissals of Kieswetter and Cook opened the floodgates for a young India side to romp home on a pitch aiding turn.Left-hander Cook was bowled by pace bowler Varun Aaron coming in around the wicket while Kieswetter was trapped lbw by left-arm spinner Jadeja five runs later.

Jadeja also picked up the wickets of Jonathan Trott and Jonny Bairstow to turn the tide in India’s favor as even the part-time bowlers started to torment England’s batsmen.“We were in with a shout there but we were blown away in the end,” England captain Cook said. “We know that you can lose wickets in a cluster but we seemed to have lost 10 there in a cluster.”Cook said he was disappointed with his team’s batting throughout the series, but especially in this game.“It was a bit of a shock. We kept trying but nothing seemed to work for us. But there were a lot of guys in the team who were playing here for the first time and had a lot to learn.”

Earlier, Dhoni anchored the Indian innings with a solid knock.Dhoni clobbered four sixes and three fours to take control after pace bowler Steven Finn led a disciplined bowling performance by England that made scoring runs difficult for India.Dhoni, who struck an unbeaten 87 in the opening game of the series at Hyderabad and guided the team home with scores of 35 not out and 15 not out in the third and fourth games at Mohali and Mumbai, continued his fine form which has seen him unbeaten in the series.The World Cup winning captain, who was named man of the series, did not get to bat in the second one-dayer at New Delhi, which India won by eight wickets.

“It was, to some extent, an ugly looking wicket as you were never really set, and it was difficult to score runs,” Dhoni said. “We were fortunate to score 270 on a wicket like this, 240 to 245 was in our mind.”For England, Finn took 2-47 and spinner Samit Patel finished with 3-57 even as Ajinkya Rahane (42), Gautam Gambhir (38) and Suresh Raina (38) added useful runs for India but failed to capitalize on their fine starts.Openers Rahane and Gambhir built a solid 80-run partnership but India lost three quick wickets in a space of 10 deliveries to lose the early advantage after being put in to bat.

Left-hander Gambhir inside-edged a delivery from Finn in similar fashion to his dismissal to the same bowler in the previous game at Mumbai. The left-hander struck a 61-ball 42 that included six fours.In-form batsman Virat Kohli fell in the same over to a delivery that angled in to knock off his stumps before he had scored a run.Rahane then shaped for a drive, only to edge one from Tim Bresnan to wicketkeeper Kieswetter as India fell to 80-3 in the 28th over.

Finn almost took another wicket when Raina was dropped by Graeme Swann at second slip. Raina, then on one, went on to score 38 before he was run out to a direct throw from Ravi Bopara while trying to take a single.Dhoni then batted himself in and increased the run rate first with Raina and then in the company of lower order batsmen Ashwin and Praveen Kumar.India and England next play a one-off Twenty20 game in Kolkata on Saturday.

A. Rahane c Kieswetter b Bresnan 42